The following are excerpts from the 2013 World Bank Report China: Accelerating Household Access to Clean Cooking and Heating:

Over the past several decades, China has made great progress in solar cooker research and promotion and now has the largest stock of solar cookers in the world. The solar cooker industry has made significant strides in commercial production and sales, including after-sales service. This section examines the history and current status of solar cooker production, identifies areas suitable for promotion, and characterizes suppliers. It then suggests how to overcome identified barriers in order to accelerate industry development.

During the early 1980s, China’s government invested considerably in solar cooker development, which led to a rapid rate of growth. However, in 1985, subsidies were substantially reduced, causing development to slow, and the industry started to explore commercialized. In recent years, with the government’s emphasis on energy conservation, the industry has regained significant support for developing and promoting solar cookers, especially in poorer regions. Over the 2000–2010 period, solar cooker stock increased more than fourfold, while production experienced ups and downs. By 2010, stock totaled 1.6 million units. In 2003, production dipped to only 54,500 units, but soon bounced back, peaking at 0.30 million units in 2008. Since then, annual production levels have remained above 0.20 million units.

China’s solar cooker manufacturers generally take two forms: specialized and local. Specialized manufacturers refer to the industrial production of certain manufacturers with technical strength and equipment. These are located mainly in Jiangsu, Shandong, Gansu, and Beijing. Most products are made of cast iron, glass-fiber reinforced concrete (GRC), GRP, and composite material and are sold over a wide geographic area. The price range is RMB 400–500 ($60-75 US) per cooker.

Local manufacturers are located mainly in Gansu, Ningxia, and Qinghai; their products generally consist of thick cement shell stoves with waste glass mirrors as reflective material. These products are popular among local residents due to their lower production cost and sales price of about RMB 200–300 per cooker ($30-45 US) and emphasis on quality and reputation, which are key to small business models. 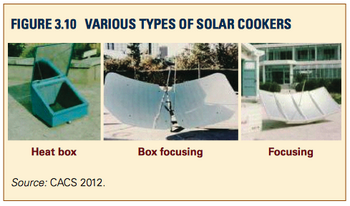 The box focusing solar cooker is more compact and can be folded into a box for convenience of carrying, which can prolong the life of the reflective material. But due to its complex structure, inconvenient maintenance, and higher cost, it is not widely used.

The focusing solar cooker is the most popular type. It is simple in structure and easy to operate, and has reliable performance, low cost, and multiple functions.

Currently, China has more than 20 enterprises that produce solar cookers distributed throughout Gansu, Ningxia, Qinghai, Sichuan, Jiangsu, and Shandong. The first four provinces are noted for their high levels of solar cooker stock. In addition, most companies are either private or joint-ownership types, with annual sales of more than 200,000 units.

Despite large production, sales rely mainly on government procurement and subsidies. The market accounts for less than one-fifth of sales because demand is centered in poorer regions, where profitability is low. Thus, government support will continue to play a major role in promotion. The quality of solar cookers varies greatly, suggesting a strong need for better production technology and greater capacity in standardizing product performance.

The application of solar cookers can ease China’s energy shortage and improve the ecological environment in some regions. To effectively promote solar cookers, various strategies should be used. For example, in low income regions, it is advisable to integrate the promotion of solar cookers with poverty-reduction planning and continue to provide subsidies, given the difficulty of commercialization due to households’ low affordability and producers’ low profitability. One might consider financial and material resources and tax relief for qualified producers and users. However, households in middle-income regions rich in solar resources should be encouraged to purchase solar cookers through diversified sales methods with improved after-sales services, such as consignment and installment. At the same time, public-awareness campaigns should be conducted to publicize the benefits of solar cookers. However, in most high-income regions, use of solar cookers is rare unless there is an extreme lack of conventional energy. To improve existing technology, R&D activities should be conducted by a highly qualified team with sufficient research funding. Special focus should center on developing stable and durable reflective material, a tracking system that enables solar cookers to adjust automatically to the sun, and lightweight box-type cookers that are environmentally friendly. To guarantee stove quality, it is essential to standardize solar cooker products through a unified, consistent system. A testing center should be established to test and monitor the quality and performance of solar cookers under the same standards. Also, technical cooperation, technical exchanges, and product trade should be established among countries, especially developing countries that face similar fuel challenges, which call for strengthened coordination among relevant departments.

Among the four market segments considered in this chapter, biomass stoves have the largest demand, especially in poorer rural areas, but supply relies on government procurement. The coal stove market has reached a certain level of commercialization and currently does not require government support; but most suppliers’ production capacity is small and, with few exceptions, businesses are limited to the respective provinces. Biogas faces the challenge of low household utilization and lack of farmer enthusiasm. Although China has the world’s largest stock of solar cookers and its commercial market is under way, it still relies on government subsidy. For market segments that rely heavily on government support, it is necessary to continue such support while exploring the possibility of creating market incentives for households to use stoves and suppliers to produce them based on market signals. All four market segments require increased access to financing and standardization of stove products against technical specifications with strengthened institutions. Annex A further examines these market segments, characterizing the interactions of stove supply, demand, and market policies in specific local contexts. Valuable lessons from these four cases can be applied to designing and implementing future stove promotion programs.