Solar cookers are not widespread in Japan, according to professor Yuichi Nakajo of the Ashikaga Institute of Technology (AIT), but they are available commercially and are used and promoted in schools. Both the Japan Solar Energy Education Association and the Japan Solar Cooking Association actively promote the use of solar cookers as educational tools. “In spite of their low saturation level,” Nakajo says, “many educators think solar cookers are ideal tools to enlighten children on fundamental physics and renewable energy.” Nakajo felt that there was a gap in the types of solar cookers available to teachers in Japan, so he set out to design a box-type solar cooker that met the following criteria: 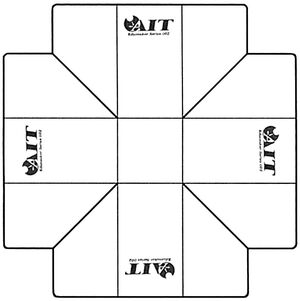 The result is the AIT Educooker, a cardboard and foil solar box cooker that comes with all the materials necessary for assembly and use, including a black cooking pot and a colorful instruction manual. The reflective interior box has the shape of an inverted, truncated, asymmetric square pyramid — two adjoining walls are angled 90 degrees (perpendicular) to the cooking surface and the other two are angled about 120 degrees. The interior can be used in one of two positions, depending on time of year, to increase the amount of sun reflected onto the cooking pot. Large, adjustable external reflectors are attached to two adjoining sides of the cooker lid, while a narrow reflector attached to the corner of the lid holds the larger reflectors in place and allows angle adjustment using hook and loop straps. These reflectors are angled high in the summer and lower in the winter to maximize exposure to sunlight. In most solar box cookers, the long side of the box is considered the front and faces the sun during cooking.

Because of the arrangement of reflectors and interior walls in the Educooker, the corner of the cooker is actually the front, increasing the sun receiving area by 40 percent, according to Nakajo. With this arrangement, up to four hours of cooking can be done without rotating the box to track the sun’s movement. Japan Solar Energy Education Association representative Iseko Shirai says that AIT has recently developed a panel-type solar cooker, the Educooker 002, and is in the process of making a larger version called the Educooker 003. Like the original Educooker, the Educooker 002 comes with a black cooking pot and colorful instruction manual. Also included is a transparent, heat-resistant plastic bag necessary for maintaining cooking temperatures in this type of cooker. Cut from a single, square sheet of foil-lined cardboard, the Educooker 002 is shaped like a boxy four-leaf clover when flat. Setup is simple — just raise or lower each of the four panels for maximum sun exposure, overlapping as necessary, and fasten with the included clips. The instruction manual suggests setups for each season, but teachers may want to have students determine on their own which panel positions will work best for which seasons or sun elevations.