View source
watch 01:54
Obi-Wan Finale - The Loop
Do you like this video?
Play Sound 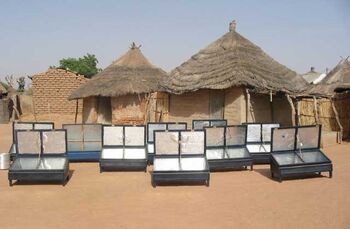 Abdoulaye Touré a former teacher, is now a government official responsible for work in the renewable energy field.

He serves as the executive of a national commission, and has direct contact with the President of the country who is so enthusiastic about the potential of solar cooking that he seconded Mr. Touré to the Ministry of Education to pursue this work. Prior to taking this position, Mr. Touré worked on solar cooking when he could, outside of his work hours as an elementary principal, in the construction and promotion of solar ovens.

In his present position, he has created a substantial amount of publicity and activities, including television shows, visits to neighboring countries to extend the technology beyond Senegal's border, and numerous demonstrations and training courses all over the country.

He is well known as the most ardent developer of solar energy, and is sometime dubbed in Senegal as "Mr. Sun."