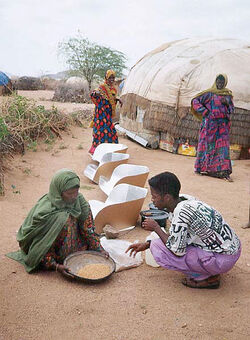 Solar Cookers International was asked by the Office of the United Nations High Commissioner for Refugees (UNHCR) to initiate a solar cooking project in Aisha, a refugee camp located in northeastern Ethiopia near Somalia and Djibouti. Despite early setbacks, nearly all of the camps 2,000 Somali families learned how to solar cook by 1999. SCI commissioned an independent, month-long evaluation of the project at the end of 2001. The findings indicate that SCI succeeded in its efforts to disseminate solar cooking throughout the camp and to reduce consumption of traditional wood and charcoal cooking fuels.

Evaluation results show significant changes in traditional energy use and a consequent reduction of local deforestation. Refugees saved time, money and effort. By 2001 close to 95 percent of surveyed households used SCI’s solar CooKit for some of their cooking. Camp-wide, consumption of firewood decreased by approximately 32 percent compared to data from four years earlier. As can be expected, solar cooking was used in conjunction with other cooking methods capable of cooking during periods of darkness or inclement weather. Frequent solar cooks consumed 44 percent less firewood and 78 percent less charcoal, while occasional solar cooks used 27 percent less firewood and 22 percent less charcoal. With solar cooking, refugees spent a full four to six fewer days each month gathering firewood, freeing up time for children to attend school and women to engage in other community and household activities. 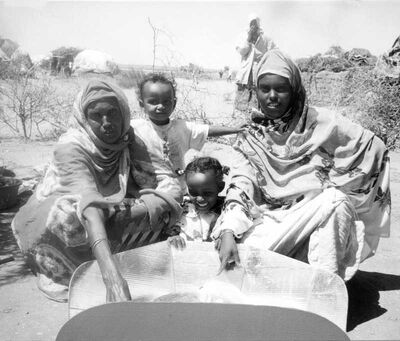 In March 1997 CooKit durability was the project’s primary obstacle. Early on, CooKits of acceptable quality were imported from Kenya. Handled properly, these CooKits lasted about a year in Aisha’s harsh conditions, allowing for hundreds of solar-cooked meals. SCI’s repeated attempts to find an Ethiopian manufacturer of acceptable CooKits fell flat, mostly due to the limited manufacturing base in Ethiopia and lack of quality cardboard. A local vocational school tried hand production, but the test-run of 500 cookers proved to be of low durability, lasting only a few months each. Unfortunately, supplying wooden box cookers was cost prohibitive.

Aisha refugee camp was slated for closure by the UNHCR. In May 2003, several months prior to the scheduled closing, SCI ended its Aisha presence. During SCI’s seven years in Aisha, nearly all camp families received solar cooking training and supplies. Additionally, 1,000 high-quality CooKits from Kenya were delivered recently to Aisha and entrusted to camp authorities. These CooKits were to be distributed to refugees as needed.

Retrieved from "https://solarcooking.fandom.com/wiki/Aisha_Refugee_Camp?oldid=101902"
Community content is available under CC-BY-SA unless otherwise noted.