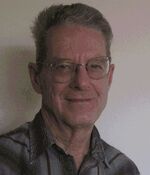 Alan Gallagher is the designer of the Solar Injera Cooker. Alan is a retired physicist, having worked at the National Institute for Standards and Technology and the University of Colorado for his professional career. He also had appointments at the research institute, JILA, in the physics department. His research specialty was atomic and molecular physics and optics. At retirement in 2006 his interest shifted to solar cooking, deciding to design, build, and test a unique large-area frying pan heated by the sun’s energy.

The new solar frying pan, a version of a parabolic solar cooker, was specifically tailored to the cooking of Injera Flatbread in East Africa. The design incorporates a faceted parabolic reflector made of individual hexagonal mirrors. This creates a less intense focus on the cooking pan, compared to a typical smooth dish reflector, for more even heat distribution on the bottom of the pan. Other types of solar cookers, typically solar box cookers and solar panel cookers, are not well-suited for frying.

Retrieved from "https://solarcooking.fandom.com/wiki/Alan_Gallagher?oldid=86925"
Community content is available under CC-BY-SA unless otherwise noted.