See also: Global Calendar of Events and past events in Algeria 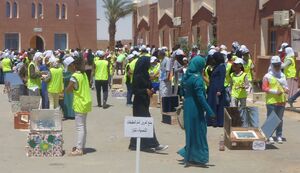 Arezki Harmim has directed a three-person research project for development of solar cookers in the Algerian Sahara. Mr. Harmim directs a working group at the URER/MS renewable energy center in Adrar and has developed and popularized solar cookers there. Posters and demonstrations at symposiums brought solar cooking to the attention of participants, many of whom sampled chicken, eggs, coffee and tea prepared in box- and parabolic solar cookers.

The entities listed below are either based in Algeria, or have established solar cooking projects there: