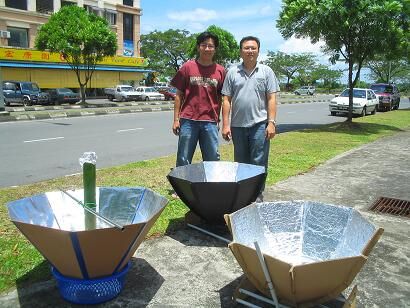 I am amazed with how Primary energy in the form of Sun-ray can be used to do work, in this case to cook food. Conversion of energies from one form to another always incur loss, which resulted in wastage and production of waste/garbage.

In the case of cooking using electricity, much primary energy in the form of fosil fuel is used to generate electricity. Worse still, much heat is generated, discharged into the atmosphere and contributed towards the global warming.

Whereas in Solarcooking, heat from the Sun is directed into the cooker and trapped therein for the purposes of heating up food. There is no change in the states of energy in between and therefore little or no energy is wasted with no polution.

Over the past year (2007), I have built several solarcookers and experimented cooking by Sun. There were some little successes to date, with of course many failures behind. The Solar Cookers that I built are named SIAP (Solar In Action Panel). Some of the performing solarcookers and cooking experience were captured in my blog site: http://solar-cookers.blogspot.com

If you are equally excited and share the same inpiration, start to cook with sun and happy sunbathing!

Retrieved from "https://solarcooking.fandom.com/wiki/Allen_Liew?oldid=124371"
Community content is available under CC-BY-SA unless otherwise noted.