This very inexpensive and effective solar cooker was designed by Solarcookingnut. 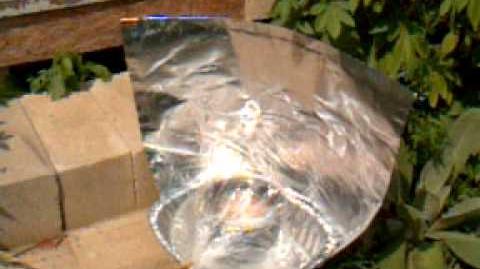 I decided that when the design of the Nesco cooked so efficiently with the curved reflector, curved simply because the cooker was curved, I wondered how it would work with an aluminum roasting pan I had in the pantry. So, I made another reflector, snugged it against the pan, set it in the sun, and seen the focal point was good and strong, eventhough the pan wasn't as oval as the nesco, I seen I had the ability to cook in it. So, I set a pan down in it without putting in a bag just to see how hot it would get. I put a little water in the pan. I turned the setup towards the sun, got the focal point in the middle and before I knew it, I seen a little bit of steam rise from the water! I knew I had something with this. So, I went and got some rice prepared to cook, got my bag and rack out, put it all together, and this started cooking the rice in no time flat. The only thing was I have to watch about how long I keep the focal point on after it starts cooking or it dries out the top layer of rice, which, really isn't a bad thing, I just mashed the dried rice down into the soft, let it reheat a little, and turn the focal point off to the side and the dried rice reconstituted from the steam.

Once I realized just how valuable this cheap set up was, I had to get this out there for those who need a good hot cooker, but can't lay out much money for a manufactured one. My nesco oven I made opened me up to a whole new line of cookers I or anyone else can make on the cheap. It was a good discovery, and has paid itself off hundreds of times over.

This is a terrific cooker for workshops in which time is too limited for cutting cardboard. The printable pdf Project Sheet will help you have a successful project. If time is extremely limited, you can just demonstrate making one of the reflectors and show how to put it together and people can take the project sheet home and make their own. Kids love making the shiny reflector panels. It is a fun, easy project for schools, clubs, and families.

Retrieved from "https://solarcooking.fandom.com/wiki/Aluminum_Roasting_Pan_Solar_Cooker?oldid=85028"
Community content is available under CC-BY-SA unless otherwise noted.