The Association for the Reduction of Carbon Emissions is a NGO under the direction of Mr. Joseph Odey, a promoter of solar cooking technology in Nigeria, West Africa.

I am Mr. Joseph Odey, and I started promoting solar cooking in 2000. I have taught hundreds of people on how to make and use solar cookers. My activities include among others the lecturing of students at institutions of learning and demonstrating solar cookers with food ingredients to the admiration of students and staff. I organise workshops and seminars on renewable energies, especially emphasizing the benefits of solar cookers. Several rural communities in Nigeria are my targets especially those suffering due to the high cost of fuelwood for cooking that is biting hard into the families' meagre incomes.

The first joint workshop on solar cooking was organized by my organization with the collaboration of Girls Guide/Scouts of America for the Girl Guides of Nigeria. The program was held at the Women Centre, Area 11, Garki Abuja FCT, Nigeria. Ms. Barby Pulliam of Girl Guide/Scout of America who is my colleaque on solar cooker promotion was my partner and part sponsor of the programme. She also sponsored Stella and Esther from Tanzania and Kenya respectively to come and join me as foreign partners. The materials for the productions of the cookers used at the occation were gotten here in Nigeria without importing any from outside the country. The workshop started on the 15th to 20th May, 2006. 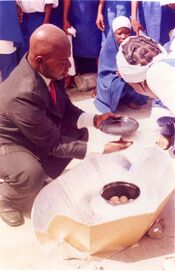 Total number of 55 Girl Guide Members from 25 states out of the 36 states of Nigeria were in attendance. It was organized solely for the Girl Guides association of Nigeria.

I am happy to report that the result of the workshop was sucessful as food items, like rice and stew were cooked as samples to the taste of all the participants. Especially that the Girl Guide members were seeing the cookers for the first time. The idea for the hosting of this workshop was conceived by me and was supported by Barby Pulliam while we were in Nairobi Seminar on Solar cooking in February, 2005. I followed up on the proposal to the Girl Guides of Nigeria Headquarters and make sure it was implemented and hence the report for your perusal. 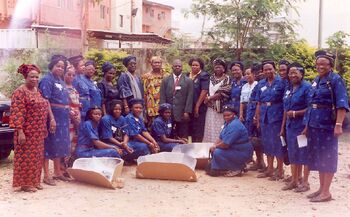 In what could be termed a major breakthrough in technological advancement, the solar cooking promotion activities of Mr. Joseph Odey which started in a skeletal form in the year 2000, has metamorphosed into a bigger size with a registration with Corporate Affairs Commission of Nigeria (An organ of Government responsible for registration of Companies and allied matters in Nigeria). The Company is made up of board members with 3 Directors leading at the affairs of decision making. Under this arrangement Mr. Joseph Agu Odey is elevated to an exalted position of the Chairman/Managing Director of the Company. The Company has the mandate of opening branches all over the country. The name of the company on registration is called: ODEY RENEWABLE ENERGY TECHNOLOGY COMPANY LIMITED, NIGERIA.

Activities includes among others; promoting Solar Energy for sustainable development, Environmental protection, Household and Industrial Applications etc. Imports and exports of solar materials. Fabrication of simple solar cookers thereby reducing the cost of fossil fuels for cooking, conserving the meager resources of the average family needs and adding it to purchase more food. I appeal to all International friends and the Nigerian people to support this company in its efforts to eliminate completely the health hazards and environmental degradation currently going on in the country.

This Edition serves as a notice to all that are concerned and very special information to the Secretariat of Solar Cookers International Association as well as SCI body. Information and activities of the Company shall be made available from time to time, including during attendance to Conferences and Congresses on solar cooking and Renewable Energy.

First I pay a visit to the school and hold meeting with the school authority / head. I introduce myself as the person promoting the uses of solar energy to benefit people and environment in Nigeria. After gaining the consent of the school authority, we strike a proposal to hold lectures both in theory and practical for the staff and students around. The cost of hosting the program is then negotiated and agreed mutually before the commencement. This money (though little) is used for printing of hand out and buying of food ingredient for practical sessions. Demonstrations on how to make and use solar cookers is done to staff and students. The more thrilling moments are when the food is cooked successfully and everybody sees it and even taste from it from it, that the demand for buying of the solar cookers is normally made. Other area of the school program include teaching and seminar presentations emphasizing more on the economic gain of solar in comparism to conventional methods. Cost of fuel wood and health hazards etc are thoroughly explained to the participants numbering over 10,000 in all the institutions. Here is the list of institutions that benefited from the special lectures on solar cooking in Nigeria:

The models of cookers build by me are: (i) Box cookers (using mirror and plane glasses (ii) Solar CooKit: “ similar to the ones build in America by SCI. material include cardboards and aluminum foil. This is the cheapest and affordable type and is also quicker to make (iii) Parabolic cookers: is a dish with a stand using metal sheet coated with aluminum foil. Very efficient but costly to produce and sell.

Every opportunity they had in seeing my demonstration in schools, communities etc. the demand keeps coming. The climate also where I reside or most part of Nigeria welcomes solar cooking. The intensity of sunshine is very high. Due to the high cost of fuel wood and cooking gases , people are now looking for any possible alternatives to cooking food in the country, if they have access to solar cooker with time it will become leisure and a relief to their sufferings. All Nigerian dishes of food ingredients have been tested and cooked successfully with the solar cookers to the admiration of all. They have seen the cooker worked and tasted the palatability of the food and came to conclusion that it is very good for them to own their cookers.

The make-up of JOKSET[edit | edit source]

JOKSET is a proposed company which is in the process of registration. It came out of my former program ie. Solar Cooker Research and Applications Centre, which was owned and sponsored by me. It is more pronounced and has a wider scope and will be recognize by the government. Jokset is made up of four key officers:

Retrieved from "https://solarcooking.fandom.com/wiki/Association_for_the_Reduction_of_Carbon_Emission?oldid=105491"
Community content is available under CC-BY-SA unless otherwise noted.