The article below is about a solar cooking promoter who is now deceased. This information is maintained here as a tribute to the important work done by Barbara Knudson. 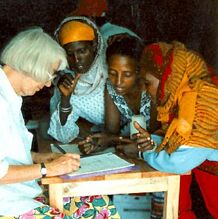 The late Dr. Barbara Knudson had extensive experience living and working in developing countries, and was extremely knowledgeable about international relations and women's issues. Her first professional job was in a refugee camp in Austria as it was recovering from World War II. Barbara worked for the United Nations (UN) on several occasions. She traveled widely in Asia and Latin America, and lived for two years in Africa - a continent she visited nearly 30 times. Most of her career was spent as a professor of International Relations and Women's Studies at the University of Minnesota. Barbara was an active volunteer in solar cooker promotion for almost two decades. She was a featured speaker at Solar Cookers International's (SCI) very first conference in 1989, and a couple years later joined its board of directors, on which she served for 12 years.

Barbara was instrumental in the early success of SCI's first field project, at Kakuma refugee camp in Kenya. In the early 1990s, the SCI Board of Directors searched for a site to field test its new solar cooker, the "CooKit." In 1994, Barbara and fellow board member Norge Jerome went to Kenya to network and brainstorm with several potential partner agencies. When Lutheran World Federation invited SCI to Kakuma, Barbara visited the camp and prepared for the launch of the project. She was part of the initial team of trainers that spent two months in Kakuma in early 1995. Within weeks, UN representatives from Geneva visited the camp and urged SCI to immediately begin a second project in Dadaab refugee camp, also in Kenya. Later, Barbara traveled to Paris to negotiate a grant from the UN to begin a project in Zimbabwe. Barbara returned many times to Kakuma in the following years to document solar cooker use and firewood savings. In 1998 Barbara helped form the nonprofit organization Solar Household Energy, Inc. (SHE), which promotes commercial dissemination of solar cookers. In 2001 she provided training services to a Rotary-sponsored solar cooking program in Turkey. Most recently, Barbara has written the book-length State of the Art of Solar Cooking.

Dr. Barbara Knudson retired as Chair, Education Division, Walden University. A sociologist, she specialized in international women’s issues. She served as an SCI board member and was heavily involved in both in-country management and evaluation of Kenyan projects.

In 2005, Solar Cookers International inducted Barbara into its Order of Excellence. She was the ninth person to earn this honor recognizing those whose "sustained efforts have contributed most to empowering people to cook food and pasteurize water with solar energy."

Retrieved from "https://solarcooking.fandom.com/wiki/Barbara_Knudson?oldid=118081"
Community content is available under CC-BY-SA unless otherwise noted.