Located in the City of Indore, State of Madhya Pradesh in Central India the Barli Development Institute for Rural Women empowers young rural and tribal women to become agents of social change through the acquisition of a wide range of skills and knowledge needed to improve the lives of their families, their communities and themselves.

Since it was established in 1985 Barli Development Institute for Rural Women has been experimenting with and successfully using solar box cookers for some of its cooking.

In 1998 the then Ministry of Non Conventional Energy Sources decided to test 8.6 square metre Scheffler Community Cookers through its five regional test centres for solar thermal devices. One such centre is located at School of Environment and Energy Studies DAVV University Indore. They chose Barli Development Institute for Rural Women has an ideal place to install and test this solar cooker. 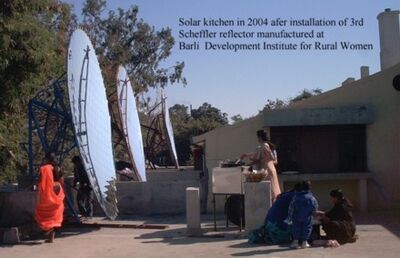 A temporary shed was built to serve as the kitchen building. This was a very basic building built with material left over from building work, the only major expense was to buy the tin sheets for the roof and some cement. When it was finished it had a tandoor and a wood burning stove for making Chapattis, the village girls would spend most of their evenings here, it had mud plastered walls, was more rural like structure and surrounding, and it sort of resembled their village homes.

In 1999 another Scheffler was added to this and the kitchen extended, a solar storage system was added, this was another invention of Wolfgang Scheffler manufactured by Deepak Gadhia in Valsad, now cooking would go on even after the sun had set, and the next morning. After this installation, Barli Development Institute for Rural Women was now cooking all the food for approximately 50 persons daily by solar energy.

Beginning in 2000, the Institute built a new dormitory complex, and on the first floor a new kitchen specially designed to use Scheffler solar cookers was constructed. As a result of this work the number of people to cook for rose to approximately 100 persons.

Seeing the large solar cookers effortlessly cooking their food while the sun is shining, some of the students now wanted to have similar solar cookers in their homes. Barli Development Institute for Rural Women started a process of supplying SK14 Parabolic solar cookers to the graduates of the Institute at subsidised prices. This work was supported by Plage in Austria. To be allowed to have a subsidised solar cooker, the graduates would have to take an extra 10 days training at the Institute on how to use, maintain and assemble the solar cookers, they are also taught about other environment protection issues, how to use the solar cooker for income generation, how to make snacks etc from crops that they normally just sell as cash crops, example soya beans etc. As a result of this, there are more than 580 SK 14 solar cookers in the homes of Barli graduates.

In December 2003 Heike Hoedt from Solare Brücke in Aislingen, Germany, came to Indore to train Barli staff and others how to build the large 10 metre square Scheffler reflectors. Shortly after this the staff of the Institute started manufacturing and establishing solar kitchens for other NGOs. By then four such kitchens were established, one in Chetna High School village Gadwada near Jhabua city where five 10 square metre Scheffler reflectors were cooking the meals for the tribal children attending school. In Village Dattigaon in Dhar a kitchen with four 10 square metre Scheffler reflectors was installed also a school established to educate tribal children. Another kitchen in a orphanage in Indore, here the solar cooker was installed on the top of a four-story building in the city centre. A kitchen with two 10 square metre reflectors were been established at a hostel for village girls in Dhani village in Dhar district. Two more Scheffler solar cookers have been installed at the Institute itself. 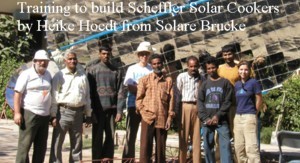 The students have also begun to incorporate the integrated cooking method with their training. This allows for additional dishes to be prepared using only one cooktop. Once the cooking food has reached the desired temperature, the cookpot is placed into an insulated container to continue cooking, and the cooktop is free to prepare another dish. This technique also allows for food to cook and be ready to serve later in the day, well past sunset.

In 2004 the Barli Development Institute for Rural Women started training existing Micro Credit Groups how to use solar cookers for food processing and income generation. For example, one group of 8 women landless laborers in the Betul district of Madhya Pradesh cook 2 hours during the peak sunshine each day using SK14 solar cookers. They make and pack local snacks, which they sell in the village markets and supply to the village panchayat meeting etc. and earn between 75 and 100 rupees each day. 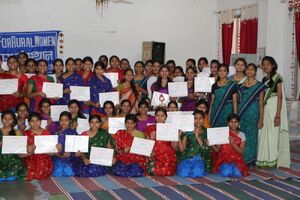 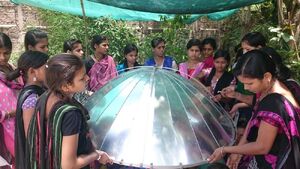