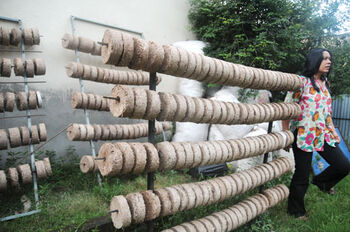 Begin by collecting waste from around your home or surrounding area, including paper, cardboard boxes, sawdust, scrap wood, rice husk, fruit wastes, grass, leaves, kitchen wastes, charcoal dust, or agriculture and forest residues. Shred these and soak them. Next, squeeze the pulp in an improvised press to remove the water.

Finish drying the resultant briquettes for two to three days, and they will be ready to burn either in a three-stone fire or an improved combustion stove. The process is energy efficient, manages waste, and provides an inexpensive alternative energy source. Briquette production can also become an income source for those wishing to make the briquettes for resale. 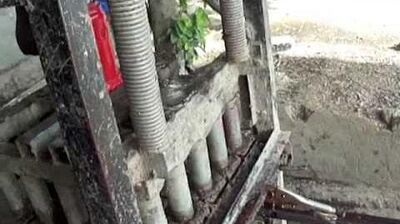 Retrieved from "https://solarcooking.fandom.com/wiki/Biomass_briquette?oldid=127986"
Community content is available under CC-BY-SA unless otherwise noted.