Joining the system’s solar components with a separate highly insulated round cook-box, further ensures Blazing Tube’s high temperature maintenance during cloudy intervals and even into the evening hours. Using no moving parts and constructed of metal and glass components, the BTSA has a long service life expectancy. Its unique energy conservation characteristics allow it to operate under marginal weather conditions, during which most other solar cookers fail. Normally operating at a temperature above 300°F (148.8˚C.), foods can be fried, baked and boiled throughout daylight hours, and maintained at hot serving temperatures above 160°F (71˚C) late into the evening hours. 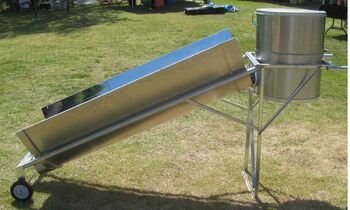 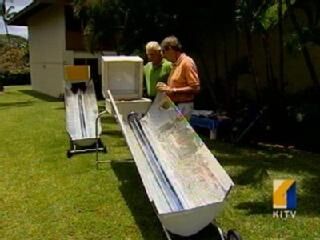 In May 2008, John Grandinetti publicized his version of an indirect solar cooker through an interview with television station KITV. The interview was picked up by affiliate stations and eventually broadcast on CNN.

Evacuated tubes have been used in solar hot water systems, and are considered a mature, efficient technology. By replacing the copper pipe and fin found in similar previous models, John Grandinetti that his indirect cooker design can reach temperatures of 400°F in direct sunlight. The Grandinetti design replaces water with oil for the heat transport mechanism in order to sustain these temperatures.

The large diameter vacuum tube (120mm OD) houses a separate sealed glass tube inside (triple cavity), which displaces most of the interior liquid volume. The resulting fluid space allows for only one gallon of vegetable oil to perform the heat transfer function to the heat retention cook box. The steel cook pan, housed within the insulated cook box, is specially designed to integrate with the glass vacuum tube. A silicone coupling hose (120mm ID) is band clamped to both the glass tube and the cylindrical portion of the steel pan outer dimensions. The manufacture indicates that the unit, placed in the sun at 8:30am will achieve a cooking temperature (300° F) by 9:30am and cooking, water pasteurization and autoclaving can be readily achieved throughout the remainder of the solar day. The heat retention cook box and the thermal mass of oil and food within, permits cooking to continue through prolonged cloudy intervals and allows deliverery of hot cooked food as late as 10pm. In addition, the manufacturer states that the unit can be used with a 15-liter stove-top autoclave, which can achieve the required 17psi steam pressure within 40 minutes of placement within the insulated cook box. Frying, baking, boiling and steaming have all been successfully accomplished.

Mr. Grandinetti worked through his non-profit organization Developing World Solar, to have his design placed into production.