Bozina Komatina, is a Mechanical Engineer, HVAC designer and solar researcher from Podgorica, Montenegro. He has a great deal of experience in solar cooking and he is in search of a solar cooker design that can be a good cooker and affordable to many people around the world.

As an HVAC designer, he prefers perfectly isolated evacuated tubes for solar cookers but experimenting in other types of solar cookers. In this part of Europe in this year 2019 almost nobody uses solar energy to prepare food or to boil water. Bozina has plans to change that and to promote solar cooking in Montenegro and neighboring countries.

He was a participate as a pitcher at the Impact 2019 conference in Belgrade. His solar cooker project “SunRocket” was chosen for three-minute pitch in front of a jury and investors from all around the world. 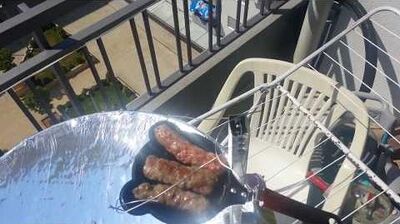 Retrieved from "https://solarcooking.fandom.com/wiki/Bozina_Komatina?oldid=120566"
Community content is available under CC-BY-SA unless otherwise noted.