See also: Global Calendar of Events and past events in Canada 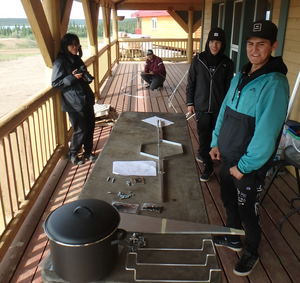 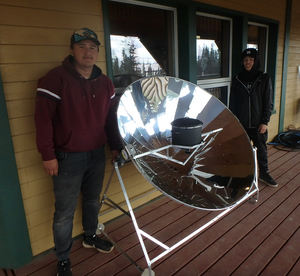 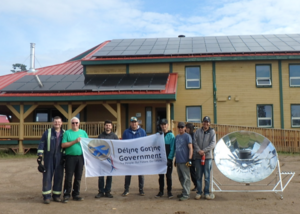 Deline community members display the cooker to be given to the local school
Gallery photo credit: Green Sun Rising

Much of the nation of Canada is not well suited for solar cooking, at least for significant portions of the year, and with any other than very expensive equipment. However, the nation has provided consistent support and considerable financial resources to the cause of promoting solar cooking in places better suited than their own nation.

Examples of this support are numerous. A community in Canada has consistently supported solar cooking activities over many years in the extremely poor nation of Haiti. As far back as 1977, Dr. Thomas Bowman and his associates from the Florida Solar Energy Center conducted a survey to learn about the situation of cooking fuels in the country. That survey told what was fairly obvious to the eye - that cooking fuel was a major problem in this very poor nation and that some solution would be needed in the near future. A Canadian group constituted itself as Communities in Partnership and began to work seriously in Haiti not long after that time. They found an excellent resource in the Haitian-American Institute, which created a small solar cooking resource center. The Canadian members systematically sought materials to stock the resource center, and it became the de facto core of solar cooking activity in the country for some years.

Haiti has, as all know, experienced considerable political tension and unrest, and still does. Through all the turmoil, solar cooking activity has gone on. After a coup in 1991, the Canadians began even more systematic activity, creating a manual on how to conduct a solar cooking project, teaching local people to carry out training, follow-up, project evaluation, and so on. The Canadians have systematically gathered information from other projects, evaluated it for potential use in Haiti, and then transferred idea to action in applied work there.

Canadian Rotary Clubs have also been active in the support of solar cooking projects. As explained in the description of Rotary activities, the support of Rotary International for initiating a project requires a number of Rotary Clubs to contribute financial resources for the pilot activity. Much of that activity, spearheaded by Rotarian Wilfred Pimentel of California, has drawn on Canadian clubs for support. Interestingly, a number of manufacturing firms making solar cookers are located in Canada.

The entities listed below are either based in Canada, or have established solar cooking projects there: