Solar Cooking
Register
Don't have an account?
Sign In
in: NGOs, Manufacturers and vendors, Chile,
and 2 more

View source
watch 01:54
Obi-Wan Finale - The Loop
Do you like this video?
Play Sound 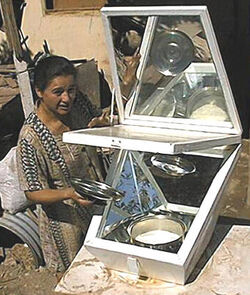 El Canelo de Nos is a non-profit organization that has worked since 1987 to serve low-income communities, especially in the IV region of Coquimbo, Chile. Oscar Nuñez Martínez, who directs environmental programs for the organization, says that the average family uses 10.5 tons of firewood per year - an environmental cost that can be relieved by solar technologies. The program often works with Juntas de Vecinos, or "neighborhood groups."

In 1994, 92 families from various neighborhood groups in the Rio Hurtado valley obtained 92 wooden solar box cookers through the El Canelo de Nos program. Similarly, the "mothers' center" in Pichasca obtained 40 metal solar box cookers in 1998, while an additional 182 solar cookers of various types were delivered in 1999 to families in the Rio Hurtado valley, along with 10 solar fruit drying systems.

Three hundred families gained economic benefits from reduced fuel usage and food preservation. Various services were provided to a high school in Pichasca in 2001, including educational materials for the students and provision of a parabolic solar cooker. In 2003, El Canelo de Nos traveled to Rinconada in Region V, where 70 families were mobilized to struggle against desertification - with the help of a variety of solar cookers and fruit dryers. 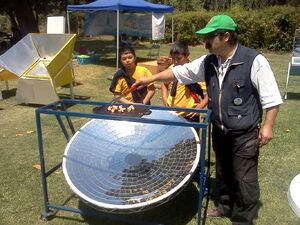