A Fresnel lens eliminates the bulk of a convex concentrating lens with the use of a series of angled steps in the front surface of an otherwise flat sheet of glass or plastic. The steps are angled in such a way as to concentrate sunlight at the cooking pot as it passes through the lens.

A larger scale version of this concept is created with a series of reflective concentric rings used to redirect the sunlight onto the cook pot. Essentially, the individual ring angles are similar if one were to cut a parabolic reflector into horizontal sections and stack them concentrically. However, this would cause shading, so the diameters of the rings each need to increase slightly to allow the light to reach the cookpot. 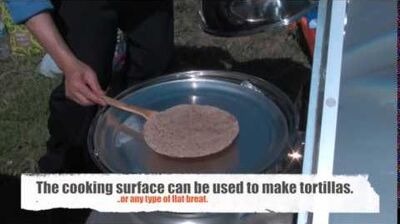