In-the-ground solar cooker designs use a hole in the ground to replace the box container of a typical solar box cooker, or to provide support for the reflectors of a solar panel cooker or a parabolic solar cooker. This simplifies construction, but the approach has some limitations. If trying to replicate a box cooker, some form of insulation, possibly leafy ground cover, will be required to line the sides and bottom of the hole.

California researcher, Said Shakerin, researched an early design that used a black insulating mat at the bottom of the hole, with a glazing cover and reflector on top. His findings can be read here: Earthen Solar Cooker

John Barker has done considerable research with the Solar Nest. He has experimented using netted bags of coconut husks to mimic digging into insulating ground cover. Others, such as Kristen Rahn, have used newspaper for insulating the cooking chamber.

The Solar puddle is a water pasteurization technique based upon the research of Dale Andreatta for large amounts of water. It is essentially a puddle of water within a greenhouse which is heated to at least 70 °C (158 °F) 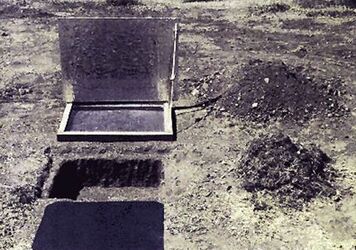 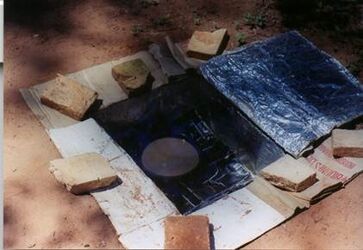 Hole in the ground box cooker by Kristen Rahn. 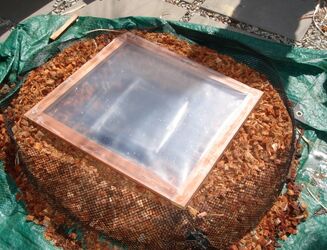 The Solar Nest by John Barker. 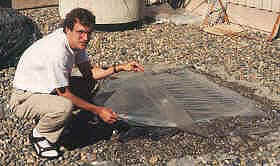 Solar Puddle based upon the research of Dale Andreatta. 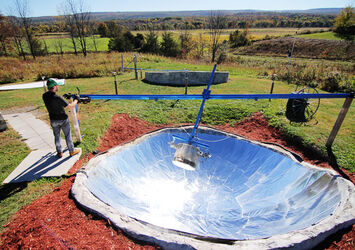 Soil consistency will also be a factor, as soil too sandy may not support the reflector blanket. Soil type is also a factor for the box style cooker, as unless the walls are supported, the soil may cave-in on the sides.

Hole in the ground using an emergency blanket[edit | edit source]

This proposed design makes use of a reflective sheet (emergency or "space" blanket) and a clear plastic sheet as the glazing. A hole in the ground replaces the structure of a normal solar cooker.

Paul van den Hurk dug a round hole in the ground about 30 inches diameter and about 1 foot deep. He made the sides about 60° and covered them and the bottom with old newspapers. Then he covered the newspapers with some old aluminum foil. He placed a black-painted cooking pot with rice inside and covered it all with a piece of glass. It took about 2 hours to cook the rice. See images below: