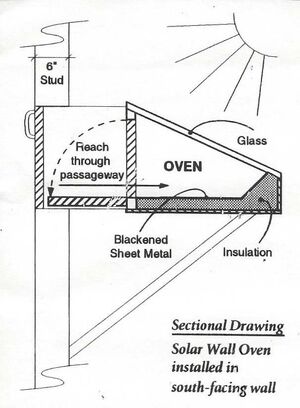 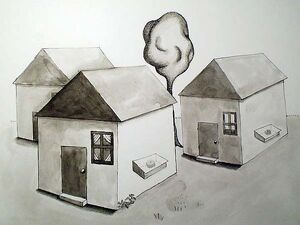 The first Solar Wall Oven that we know of was designed by Paul Funk and was Barbara Kerr’s pet project for over two decades. In 1985, Ms. Kerr first built a solar wall oven into the house she designed in Taylor, Arizona, USA, and she dreamed of making this cooker available to the world. The main impediments have been how to draw up plans for constructing the oven, and how to instruct people to correctly install it. Now, Do-It-Yourself Guidelines for design of the oven have been drawn up to appeal to designers, architects, builders, and remodelers so they can create their own variations to suit their circumstances. The guidelines do not provide detailed construction plans for either the cooker or its installation. This leaves wide latitude for selection of materials that are locally available and/or compatible with the type of home construction. This document also contains instructions on how to mount the oven in the south wall of a house positioned to receive sufficient sunlight to cook properly. Over the years there has been continuing interest in the Solar Wall Oven from people desiring a truly practical solar cooker. We hope these guidelines will at last succeed in making it possible for people to incorporate Solar Wall Ovens into their lifestyle.

To build a solar wall oven, you need a kitchen (or other convenient room) with an unshaded south facing wall. It would be less expensive to incorporate this "feature" when building a new home. Still, for those with the ability to do so, there is ample reason to consider adding a solar wall oven to an existing home.

Benefits of using any solar oven:

Now let's look at the additional benefits you get when building the solar oven into the wall of your home:

Building a solar oven into a wall of your home will help you save energy and money, while also lowering emissions and cooling and heating costs — at no added inconvenience.

Note: The Solar Wall Oven is more suitable for homes in the temperate zones away from the equator. In equatorial zones, the sun rises in the east and follows a path to directly above the house; it then continues this path until it reaches the horizon in the west. This makes a south-facing wall oven less practical in this zone if there is any overhead eave shading. Generally, a more east-facing wall cooker will favor cooking in the morning and/or a west-facing wall cooker is suited for cooking later in the day. 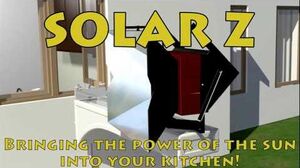 The Scheffler Community Kitchen, designed by Wolfgang Scheffler, incorporates a large parabolic reflector installed facing the exterior kitchen wall, which focuses the concentrated light through an opening in the wall. The reflector typically has a tracking system to keep the reflector aligned with the sun. On the other side of the wall, cooks can bake and grill food at a convenient working height. The cook space can be installed in a traditional home or behind a freestanding wall on a raised platform, allowing the cooks to work in a shaded space. A community kitchen like this can be shared by village members. 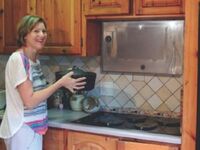 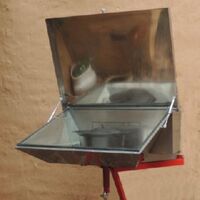 Johan van Wyk, the founder of SunGenius, undertook the challenge to take solar cooking to the comfort of the inside of the house. He believes it should be a state-of-the-art household appliance, which will compete with other household appliances for quality, convenience, and style. 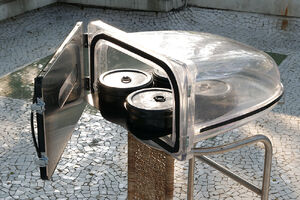 The Sunrice solar cooker was developed by Avinash Prabhune, a student of the Industrial Design Centre, IIT Bombay. It is designed to be mounted in a south facing window opening, allowing the cooker to be tended form inside the home at a height similar to other kitchen appliances. This innovation was awarded the Gandhian Young Technological Innovation (GYTI) Award 2018, by the Hon’ble President Shri Ram Nath Kovind at an event held at Rashtrapati Bhavan on 19 March 2018. Read more...