See also: Global Calendar of Events and past events in Chile 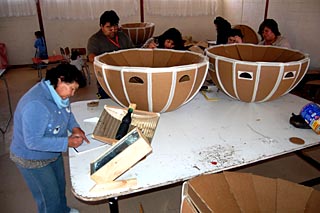 The long thin nation of Chile, stretching along the western flank of the Andes for close to half of the continent, has lively and extensive solar cooking programs in this part of the world. Considerable collaboration between a number of university faculty members, government units, and voluntary organizations has produced a situation which provided enormous publicity for the use of solar cookers. Even though the technology cannot be used in all parts of Chile for all months of the year, a number of projects have been carried out successfully and use is widespread in areas where solar cooking is appropriate.

Faculty members of the Institute of Nutrition and Food Technology, University of Chile, were instrumental in starting early programs in various regions of the country, testing devices and project methods in arid and semi-arid regions where fuel had become extremely scarce. In early stages, a "national contest" was held to encourage innovation in design and to create widespread interest in the potential. Twenty-two designs were submitted to the competition, clearly reflecting strong interest. Eight of them proved to function satisfactorily and were later used in the demonstrations. Next, an "encounter" was held, focusing on how to make cookers available economically and how to adapt them to the specific needs of households. A project was then developed in a rural municipality town, Lampa, north of Santiago (central in the country), employing a population of 72 families as interviewees to explore issues of fuel usage and expense, household size and food preferences, cooking patterns, etc. A small number of cookers were made available for use of selected families as "experimenters." Considerable interest was generated, other community meetings were held, and ultimately the community decided to build cookers themselves. This experiment served as the basis for projects in different areas. A portion of this work was accomplished in connection with a UNESCO project focused on use and conservation of hydrological resources in Latin America and the Caribbean. Representatives of this university unit have also prepared an excellent solar cookbook for use in projects in Spanish-speaking countries.

A number of other institutions have collaborated in solar promotion in Chile, including the Universidad Technica, School of Architecture, where a prominent promoter, Pedro Serrano, is affiliated. The best known project in Chile is located in Villaseca, also north of Santiago. In this community, virtually all residents cook with solar power. The area is ideally suited, being blessed with 310 days of sunshine in a year and plagued by dramatic fuel scarcity. Perhaps the best known part of the work in Villaseca (and certainly the best publicized) is the open-air solar restaurant using ten large reflecting ovens and providing employment for members of 26 families. It serves meals to around 60 people a day and must turn down 40 others until it can increase its capacity. It is a frequent stop for tourist groups from many nations. The owners also use homegrown organic vegetables and fruits and are reputed to serve the best food in Chile.

Many stories are associated with the Villaseca experiment, including one about the local safety inspector who insisted they needed a chimney for smoke to pass through. But for the most part, the work garners praise and its proprietors are kept busy responding to questions from other villages that would like to emulate the project. Serrano estimates that there are around 300,000 potential users of solar ovens in Chile. Villaseca women have also been lending a helping hand to women in neighboring Paraguay who are interested in learning more about solar cooking.

The experiments in Chile appear to have substantial support from government and other organizational sources. In addition, as long ago as 1992, the German group Solar Institut Jülich had demonstrated the use of parabolic cookers with retained heat capacity, an experiment later repeated in India, Egypt, and elsewhere. Chileans have thus been exposed to a range of types of cookers in the search for designs powerful enough for their climate.

The entities listed below are either based in Chile, or have established solar cooking projects there:

Retrieved from "https://solarcooking.fandom.com/wiki/Chile?oldid=117361"
Community content is available under CC-BY-SA unless otherwise noted.