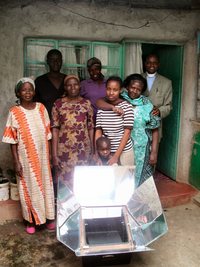 Whilst our solar ovens use no fuel and are completely powered by the power of the sun, our energy efficient stoves require fuel but are approximately 75% more efficient than an open fire. Solar ovens heat up to around 180 degrees Celsius and are used for sterilising water as well as cooking.

The choice of distributing either a solar powered oven or building an energy efficient stove is made by our project managers on the ground, based on factors such as the immediate environment of the receiving family and local customs.

In addition to the saving in greenhouse gas emissions, the reduced need for firewood and the burning of rubbish leads to a corresponding reduction in the amount of time spent collecting the material. The users of our new technologies also gain considerable co-benefits such as reduced costs and a considerably improved environment from a health and safety perspective. This is another example of co2balance seeking projects with a wide range of additional benefits to the receiving community, including health, financial, social and environmental. In this way, we can maximise the project’s achievements beyond simple carbon saving

[This text was borrowed from http://www.co2balance.uk.com/carbon-offset-projects/solar-ovens-and-energy-efficient-stoves/details on February 25, 2009.]

Retrieved from "https://solarcooking.fandom.com/wiki/Co2balance?oldid=120359"
Community content is available under CC-BY-SA unless otherwise noted.