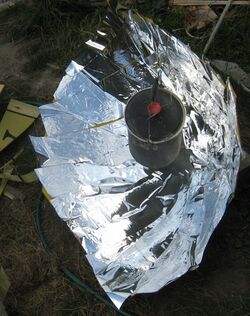 Compound parabolic dishes differ from parabolic dishes in that they do not focus to a burning point but rather to an area and they have an acceptance angle in which the sunlight will fall on that area. The acceptance angle and the area can be adjusted by the designer to suit the situation. Another difference is that the dish does not have to be pointed exactly at the sun and it will still work almost as well. Parabolic dishes on the other hand have rapidly deteriorating performance if they are not pointed exactly at the sun I designed this solar cooker by rotating a parabola by 45° around its focus and then joining the two inside curves together. This means that for for 45° of sun movement the light is focused in an area at or behind the focal point. Forty-five degrees is three hours worth of sun movement. This means that you can potentially set up the solar cooker and leave it unattended for three whole hours of cooking!

See Details on this cooker.

Retrieved from "https://solarcooking.fandom.com/wiki/Compound_Parabolic_Solar_Cooker?oldid=78799"
Community content is available under CC-BY-SA unless otherwise noted.