Developing World Solar is an NGO based in Hawaii, USA and founded by John Grandinetti, which is specializing in water pasteurizers and water purification for under developed areas of the globe. The appliance used for water purification is similar to a more traditional solar cooking oven. It incorporates a trough style reflector and a vacuum tube, to generate quite high temperatures in an attached pot. 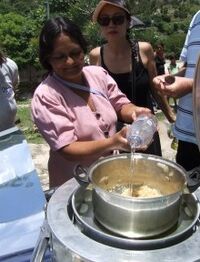 Retrieved from "https://solarcooking.fandom.com/wiki/Developing_World_Solar?oldid=124486"
Community content is available under CC-BY-SA unless otherwise noted.