The Devos cooker is a parabolic solar cooker with a table to protect the cook. However, many differences and advances are noticeable from the usual parabolic cooker:

The Devos cooker, with a particular size, has given the following results:

The Devos cooker is easy to use as a barbecue, a fryer, or an oven. Depending on the area, it has given good results to do the cooking for up to ten people. [1] 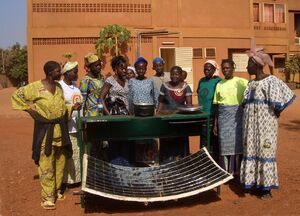