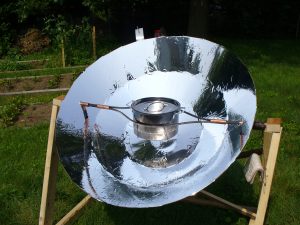 The Earthbound Cooker is a new solar panel cooker. Some design features are similar to those used in other cookers, but we believe that the overall design is different from any existing cooker. The basic shape is that of either a double angle cone or a triple angle cone with the cooking pot located near the mouth of the cooker. Locating the cooking pot near the mouth of the cooker allows the sun to heat the bottom and sides of the pot.

The idea for the EB Cooker evolved as we were building and analyzing funnel cookers and Parvati cookers. These cookers, and most other panel cookers, primarily heat the top and sides of the cooking pot. The heat transfer mechanism from the top of the pot to the contents of the pot usually is not very efficient. Therefore, we decided to design a cooker that heats the bottom and sides of the pot. Parabolic cookers meet this requirement. However, they are dangerous because of the point focus, they are relatively hard to build because of the parabolic curve, and the heat usually is unevenly distributed over the pot surface. We chose to design double angle cone and triple angle cone cookers because they are relatively easy to build, and do not have a point focus. The only curves that need to be cut are circles. We have experimented with different support structures to hold the pot just inside the mouth of the cooker

When building a cooker, one of the first decisions is how large it should be. Larger cookers will cook faster, but smaller cookers usually are less expensive to build and are easier to transport and store. We usually favor larger cookers because we believe that solar cookers will be more widely accepted if their performance is closer to that of the typical kitchen stove. However, if you don’t mind waiting longer for the food to cook, food cooked in slow cookers can be especially delicious. For EB cookers, another decision is whether to use a double or triple cone design. The diameter of the target sphere is determined by dividing the cooker diameter by 5 for double cone cookers and by 7 of triple cone cookers. For example, both the EB‑42T and EB‑30D focus the energy onto a 6” diameter sphere when pointed directly at the sun. If the cooking pot you intend to use has a diameter of at least 6” and is at least 6” deep, either of these designs would work. However, an EB‑30T, would have a 4.3” target sphere and would allow the use of smaller pots and provide some margin for focusing error. Even though it takes a bit longer to build a triple cone than it does a double cone, we recommend triple cones for all but the smallest cookers.

We have built several prototype EB cookers. We have completed an EB‑42T and an EB‑30D, and have started an EB‑24T. Most of the testing has been done with the EB‑42T using our data acquisition system. Also, we have cooked a few meals in the EB‑42T. The results of the tests are very encouraging and will be reported elsewhere on the web site.

[Text for this page was borrowed from http://www.earthboundtech.com.]

Retrieved from "https://solarcooking.fandom.com/wiki/EarthBound_Cooker?oldid=28651"
Community content is available under CC-BY-SA unless otherwise noted.