See also: Global Calendar of Events and past events in Ecuador 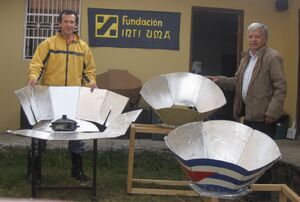 In Ecuador, solar cooking has had support from the government, largely through the involvement of representatives of a semi-official unit known as IECAIM, or the Ecuadorian Research Institute for Women's Training. The group was organized to serve as a focal point for the country in connection with the work of the United Nations agency called the International Research and Training Institute for the Promotion of Women (INSTRAW), a specialized agency focused on the issues of women. One of its areas of interest was the use of new and renewable forms of energy, which encompassed solar cooking and solar drying of foods. IECAIM took up that challenge and has been the most active promoter of solar cooking in Ecuador, under the leadership of its Director, Fabiola Cuvi Ortiz. IECAIM has been active since 1986 in providing training courses for women on building and using solar cookers. Workrooms were established for meetings and training courses. Initially, 300 solar cookers were built, mostly women themselves, who were also trained in the new mode of cooking. Both newspapers and television media were used to publicize the efforts and results of this work.

After the pilot efforts proved to be very successful, promotional activity was carried out in many places where women and girls congregate, schools, factories, and women's groups. In a situation of unrest (a border dispute with Peru), cookers were provided for the displaced families. In the course of this work, four small production industries have been started, building cookers to sell to others, with work done by women. In total, nearly 1,000 cookers have been disseminated in Ecuador. The Institute has also published two books, one on solar oven construction, and the other on cooking.

The entities listed below are either based in Ecuador, or have established solar cooking projects there:

Retrieved from "https://solarcooking.fandom.com/wiki/Ecuador?oldid=117363"
Community content is available under CC-BY-SA unless otherwise noted.