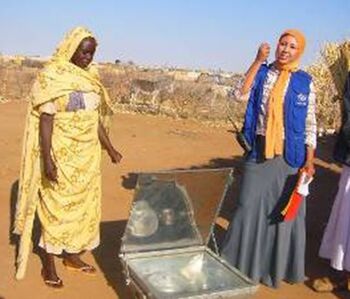 The United Nations Industrial Development Organization (UNIDO) is partnering with UNICEF and the International Organization for Migration (IOM), a leading inter-governmental organization with offices in over 100 countries, to introduce solar cookers to internally displaced persons (IDPs) in South Darfur, Sudan. Based on input from a survey conducted by UNIDO, a prototype solar box cooker was developed and tested with women’s groups in Khartoum. For the pilot phase of the project, ten ethnically diverse women from El Serief Internally Displaced Persons Camp learned how to use the solar cookers during three days of training. (El Serief is home to approximately 13,000 IDPs from 21 ethnic groups.) The training culminated with successfully solar cooking several traditional dishes. Eight of the 10 women continued to regularly use their solar cookers after a month-long trial, with several hoping to cook not only for their families but also to bake goods for sale. According to the IOM Sudan Newsletter, one of the 10 women — Ms. Hawa Abker, who has lived at El Serief since 2005 — reported being happy about her solar cooker because she spends less money on charcoal and firewood for cooking. “I am saving two Sudanese pounds per day,” she says. IOM and UNICEF plan to scale up the project, hoping to reach an additional 500 women during the months following the pilot phase. A primary goal of the project is to reduce sexual and gender-based violence against women and girls that are vulnerable while collecting firewood away from the camp.

Retrieved from "https://solarcooking.fandom.com/wiki/El_Serief_Internally_Displaced_Persons_Camp?oldid=120050"
Community content is available under CC-BY-SA unless otherwise noted.