See also: Global Calendar of Events and past events in Ethiopia

Submit your solar cooking data by filling out the simple form on the Solar Cookers International website or email info@solarcookers.org. 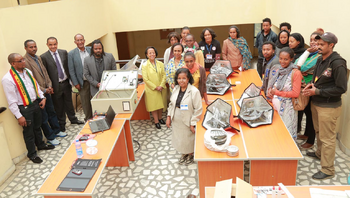 The solar cooking work at the Aisha Refugee Camp was initiated at the request of the United Nations High Commissioner for Refugees, through a staff member named Christopher Talbot who had seen the project in Kakuma refugee camp in Kenya. At that particular time, the UNHCR was being severely criticized for the massive destruction of forests caused by refugees from the southern Africa civil wars in Mozambique and Angola. A UN "pledging" meeting had been held for the purpose of raising millions of dollars to restore terrain ravaged by refugees in camps run by UNHCR in that part of Africa. Funds were in fact given for additional refugee work, of course, but with the strong admonition to UNHCR and its allied organizations and governments to take great care to see that damage to the environs of camps from uncontrolled collecting of firewood by refugees be strictly curtailed. UNHCR was thus urgently seeking solutions. Seeing the solar cooking project in Kakuma led them to undertake an experimental program in a small camp in an isolated corner of Ethiopia.

The camp's inhabitants are almost entirely refugees from nearby Somalia; the camp is located near enough to the border that it was even possible for refugees to make visits to their former homes from time to time. The area was one with limited forest cover even at the time the camp was established, and soon the landscape was nearly desolate. Refugees who at first could make a fuel gathering trip and back in a/day soon had to change to a pattern of using draft animals to go longer distances requiring two or three day trips. Fuel gathering thus ceased to be one in which women and children gathered wood nearby to one in which commercial arrangements were made by entrepreneurs who hired woodcutters and draft animals, then sold the wood to refugees. The difference was immaterial to the environment, of course, which suffered substantially from both practices.

Aisha was not large, as refugee camps go. It housed around 2,000 households and between 14,000-15,000 individuals. The site itself was far from Addis Ababa, both difficult and time consuming to reach. But the site also offered a place where need was great, where sunshine was abundant, where the population was relatively stable (for a refugee camp), and where careful and detailed evaluation would be possible. A baseline study of fuelwood use was done for later comparison, and the project began in 1998.

The project in Aisha continued until 2002, by which time all refugees who were interested had been supplied with cookers and trained in cooker usage. Refugee women and men were trained to be the trainers of others and an Ethiopian coordinator oversaw the project for SCI. Before formally closing the work as an SCI sponsored project, a final evaluation of the project was undertaken by an Ethiopian social scientist, with noteworthy results. About 95% of all householders in the camp used solar cookers, at least part of the time. Spending for fuel declined by 42% from pre-project days.

Refugees spend substantially less time gathering wood, allowing children to attend school and women to engage in community and income generating activity. Additional details of the project's operation, management, and outcomes are provided for the reader in the case study on this project. Aisha Solar Cooking Project

Climate makes a big difference in how much value is derived from solar cookers. All of Ethiopia is close enough to the equator to get plenty of solar power whenever the sun is shining (not counting the first hour or so after sunrise and before sunset). To get more good use from solar cookers, one wants not only ample hours of sunshine during daylight, but predictable sunshine--reducing the guess work about whether one's food will cook with solar power today or not. With the lower cost cookers made of cardboard, surprise rain can also damage the cookers severely.

In one of our field projects--in Kakuma, in northwestern Kenya--our field staff kept track of the weather on a daily basis for years and figured there were about 200 sunny days good for solar cooking in that climate. People could reduce their use of combustible fuels by 40% or more annually with that number of sunny days, and the people who learned solar cooking were grateful. They were using the low power, cardboard CooKit type cookers.

Twelve months of sunshine is not a necessary condition for successful solar cooking. But clearly, 300 sunny days per year will enable more fuel savings than 200, and 200 will be better than 120. How does one decide whether the local climate is sunny enough? From an economic point of view, it would depend on the cost of the cookers over their lifetime compared to the amount of fuel they would save over their life time and the price of that fuel. So one can afford to pay more for cooker A compared to cooker B if cooker A lasts sufficiently longer or if it saves more fuel. Also, one can pay more for cookers and still save money on fuel costs in places where fuel prices are higher.

The question becomes very local. How much sun do I get, at what time of the day, when do I cook, how many people do I cook for at once, how much does cooking fuel cost?

As far as I know, there is no definitive science that tells us the cost/benefit ratios for the many different variations on solar cookers that exist today, nor can it be said that cooker X is definitely best for this climate or that economic niche. A process of discovery is gradually unfolding. Making choices for your project will not be fool-proof, but familiarity with local conditions, habits and attitudes coupled with reasoning and gathering feedback from a variety of sources should help. Also, it would be great to talk to the people who will be doing the cooking to find out how they feel about switching to a new system and what sort of system they would want.

When one thinks of cooking in Ethiopia, one thinks immediately of njera bread, which must be cooked with fairly high heat. If the ethnic groups you work with are not eating an njera-based diet, then you probably don't have a problem--but if njera is a staple, then you will need to be sure that your cooking system can handle it. Open "panel cookers" like SCI's CooKit are not njera-friendly, and neither are the simpler, home-made box cookers. Parabolic cookers should be able to cook njera. I would think the Scheffler reflector system would have no problem making njera bread, but I think I would double check with the designers and be sure to include temperatures suitable for njera when you discuss your specifications for what you want. The type of fluid (and its particular boiling point) that circulates carrying heat in a Scheffler system could make an important difference in the maximum cooking temperatures you could get, and therefore those desired temperatures would be something to discuss with designers of Scheffler type systems.

The entities listed below are either based in Ethiopia, or have established solar cooking projects there: