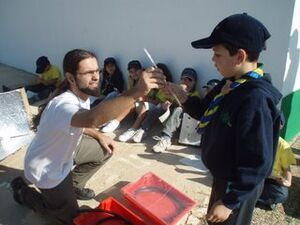 I've started exploring the solar cooking technology potencial as a tool in science education, mainly as an excelent way of showing how empirically gained knowledge could turn into bright technologies if we pay attention to them. That happened during the summer of 2005, as I had the opportunity of creating a summer solar cooker workshop series for 6 to 12 years old children, in Centro Ciência Viva de Tavira, where I've worked. Since then, I have done regular workshops for families, students, scouts, or just curious people.

In these workshops I try not to overload people with theory, but instead put them to work on creative models, starting from simple experiments that show the physical basis of solar cooking.

Last year, i've managed a cooperation project based on inter-scholar team and communication for the transfer of solar cooking technology. The project, called ImpulSolar, started with the cooperation between Portuguese students from Tavira and students from Porto Novo, Cape Verde. It was a sucess! But the project stoped due to lack of funding...

Retrieved from "https://solarcooking.fandom.com/wiki/Filipe_Santos?oldid=97641"
Community content is available under CC-BY-SA unless otherwise noted.