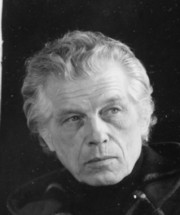 Fraser Symington from Almonte, Ontario, Canada, was a pioneer in the design and manufacture of solar cookers and solar ovens.

25 years of experimentation, Mr. Symington's early vision of solar solutions for developing world economies has resulted in solar concentrating arrays like the the Vesta, the Apollo, and the Helios. Hallmarks of his designs are:

The simplified story runs as follows: Fraser's son, Tracy Symington, saw a boy in India driving a grain mill with an ox. He thought to himself, “This boy is harnessing the power of an ox.” He then looked at the sun, and wondered, “Why can’t this boy harness the power of the sun?”

Fraser then proceeded to develop the technologies he called Symington Solar Arrays which consist of bent mirrors on simple steel frames.

Fraser's designs and vision inspired many people, including his grandson, Lorin Symington who is now working for Solar Fire Concentration Ltd. of Tampere, Finland.

Retrieved from "https://solarcooking.fandom.com/wiki/Fraser_Symington?oldid=93371"
Community content is available under CC-BY-SA unless otherwise noted.