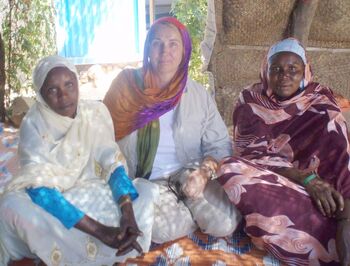 Gabriele Simbriger-Williams of Monterey, California served on the Solar Cookers International Board of Directors from 2003 to 2009 and was the At-Large member of the Executive Committee.

She began working in Africa more than 20 years ago, living in Mali from 1985 to 1992, where she worked for the German development agency GTZ to introduce fuel-efficient stoves. Her field of expertise is in social marketing, environmental education and monitoring and evaluation. Since moving to the U.S. in the early 1990s, Gabriele has returned to Africa repeatedly as a consultant in Burkina Faso, Madagascar, The Gambia and Tunisia. In late 2007 she visited the Iridimi refugee camp in Chad to help evaluate the large solar cooking project there (a brief report on her trip).

Gabriele recently returned from a trip to eastern Chad, the central African nation that borders Darfur, where she spent two weeks evaluating the use of CooKit solar panel cookers in two refugee camps. Since conflict broke out in 2003, more than 3 million people have fled from their homes in the Darfur region of Sudan. Of those, more than 200,000 are living in 12 camps across the border in Chad. The camp that Gabriele visited, Iridimi, is the makeshift home for nearly 18,000 Zaghawa refugees almost all of whom are now using solar cookers and efficient woodstoves to reduce the need to exit the camp and risk attack or rape to gather wood.