See also: Global Calendar of Events and past events in Germany 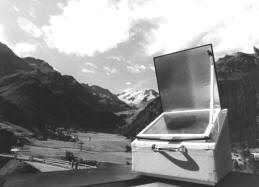 This nation has been an outstanding exporter of solar cooking equipment, knowledge, and promotion over many years, as seen in the country reports which provide information about the many places they have been active. EG-Solar, active in many international sites, attempts to provide education and equipment for people in Germany, as well.

Information that would provide the full picture of use in these major European countries is not available, though most would estimate it to be limited. Though the price of much of the equipment produced in Europe and shipped elsewhere is sufficiently high that it must be subsidized abroad, it could however be sold for backyard or patio use in Europe, and some attempts in that direction are underway. No overall information on the success of that is available.

In Germany, one small experiment in using carbon trading is in place, mentioned in the section on EG Solar. Dr. Dieter Seifert has led the solar cooking community through his thorough investigation of the potential of the Clean Development Mechanism (CDM).

The only example known to this writer (Dr. Barbara Knudson) of the mechanism being used by solar cooking promoters is one in which a small program in Nepal has been financed with funds from the German government on the basis of carbon exchange credits. Dr. Seifert has taken the lead on this matter, and the solar cooking community would do well to learn more about the potential offered by the international framework of the Kyoto agreement.

The entities listed below are either based in Germany, or have established solar cooking projects there:

Retrieved from "https://solarcooking.fandom.com/wiki/Germany?oldid=117379"
Community content is available under CC-BY-SA unless otherwise noted.