Prof. Sharon spoke about his work in a Cornell University interview:

"So I made this new ... broke some new paths there and further research is needed to stabilize and standardize the technique. So this is one example where I felt very pleased with it. Then it also happened later on there that very soon in this area there was a huge earthquake, about 7.5 or 8 scale and a whole lot of buildings were flattened, same area. Again I went there to see what can an engineer do there. Now everything else that is needed by way of relief and help to such situations, it was being done but I said, okay people are sending food there, clothes there, medicines there and everything else is being done. So what can we do. So I set up solar kitchens there right out under an open sky in the fields and began to cook food in that... my reasoning was that there's no fuel there and there's no knowing how long it will take to restore fuel supplies, wood and kerosene and whatever they were... gas... so we said, okay let's begin to cook food. So I set up in actually half an acre land and a huge kitchen, solar kitchen with hundred solar cookers arrayed you know, at one place and began cooking food and women and children were injured, so they welcomed this idea that without having to cook, we're getting food. This then led to development of solar cafeteria as a permanent device to be used in normal times as well in this area. So this is how it went. So in this way I didn't choose that area to work on but once I accepted the job and I had an exposure of what kind of problems it is facing, I then began to take interest in solving them and now I find it a very rewarding thing to do." 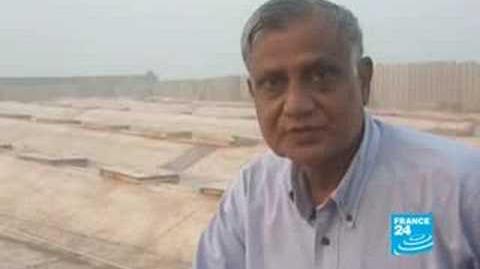