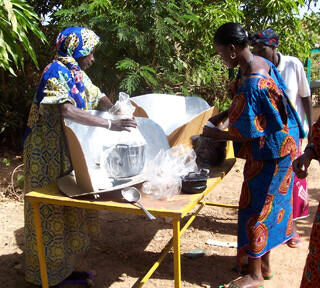 The KoZon Foundation began introducing solar CooKits in Gorom-Gorom, Oudalan in 1997. As is often the case, initial acceptance was very high. To measure long-term acceptance and usage, KoZon surveyed more than 50 families multiple times from 2002-2005. During the dry season, lasting from March-June, 30-45% of the families used their CooKits regularly (approximately 3-7 times per week). The month of April had highest usage, followed by May and March respectively. CooKits were used to cook a variety of foods, especially rice and sauces of meat, chicken or legumes. Nearly all families rated food taste as good to very good. CooKits were also used to heat milk for making yoghurt, and to heat water for making tea and coffee, as well as for washing purposes. Several families said that the capacity of one CooKit was not enough for large families, and that two CooKits would be better. Durability of the cooker was also mentioned as a concern, given that the cost of a CooKit and a cooking pot is 5000 to 7500 CFA franc, or about $10 to $15. Even though this is quite expensive for the families of Gorom-Gorom, each solar-cooked meal saved an estimated 50-180 CFA in fuel costs. Over 90% of the families said they planned to buy a replacement CooKit when theirs wears out. KoZon lists several lessons learned during this process, including: 1) One CooKit is best suited for families of less than six members, or for single male households; 2) Complementary technologies, such as fuel-efficient wood stoves and heat-retention cookers, should continue to be taught in addition to solar cookers; and 3) Ongoing guidance, encouragement and follow-up should be provided by trained members of local institutions.