View source
watch 01:25
Jurassic World: Dominion Dominates Fandom Wikis - The Loop
Do you like this video?
Play Sound
This article is about an entity that either no longer exists or that may no longer be active in solar cooking promotion. It is retained here for archival purposes.

The Grupo de Energías Renovables Aplicadas (Applied Renewable Energy Group or GERA), University of the East, was founded in 1997 under the direction of Professor of Physics Jorge Bonzon in Cuba. He has been working on the issue of renewable energy applications for considerable time and has earned several awards in the field. Their work includes the dissemination and promotion of renewable energy as a way to sustainable development and independence from fossil fuels and to encourage the younger generation to develop an environmental conscience. 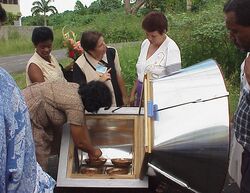