Note: These guidelines have been developed by Solar Cookers International for solar box cookers and solar panel cookers. Recipes may need to be adapted when cooking with parabolic solar cookers, which cook at much higher temperatures. 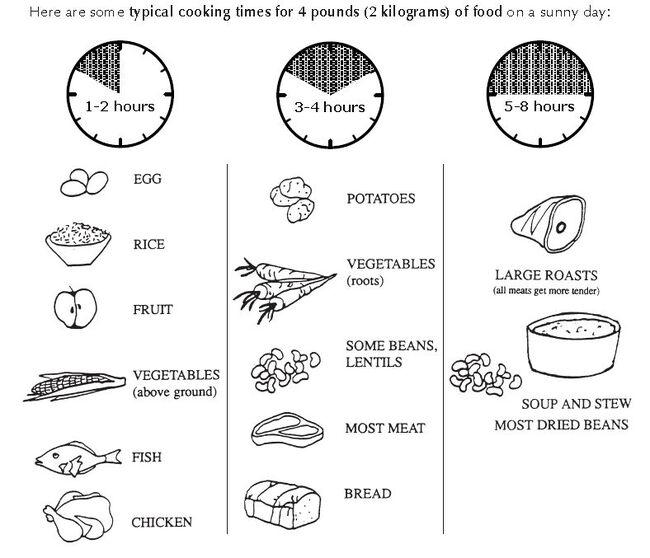 COOKED DRIED CEREALS AND GRAINS - (barley, corn, millet, oats, quinoa, rice, wheat): 2 hours. Start with usual amount of water. Next time adjust to your taste. If your sky conditions are less than ideal, you may have better luck if you preheat the water and grain separately, as suggested for pasta. This is especially helpful if the grain is either very slow to tenderize (brown rice, hulled but not pearled barley) or gets mushy easily (quinoa, millet). To learn about using barely-sprouted grains and beans, which take to sun cooking very well, see Sprouting seeds and grains.

VEGETABLES - Add no water. Artichokes: 2 1/2 hours; Asparagus: 1 1/2 - 2 hours; Other fresh green vegetables: 1-1 1/2 hours. If cooked longer they will taste fine but lose their nice green color. Beans - dried: 3-5 hours. Usual amount of water, can be soaked ahead of time; Beets, Carrots, Potatoes and other root vegetables: 3 hours. Cabbage, eggplant: 1 1/2 hours if cut up. Eggplant turns brownish, like a cut apple, but the flavor is good; Corn on the cob: 1 - 1 1/2 hours. The corn kernels will fade slightly if left longer in direct sunlight. The husk will hold the moisture in and protect the kernels naturally. A clean black sock can be put over an ear of corn to help absorb heat for faster cooking time. Squash, zucchini: 1 hour. Will turn mushy if left longer.

Dave Oxford's recommendations on adding water to the pot: The difference is in the heat transfer medium - boiling water, condensing steam, and hot air respectively. The three methods produce different results, and have different efficiencies. Boiling takes longer because there is more water to heat to boiling point, and leaching can take place. Steaming is more efficient, because we can get away with using less water. Baking is the least efficient, and tends to dry out the veg, though if this is done inside a tube cooker, some steaming is inevitable, too. Boiling offers an opportunity for even deployment of salt, and baking allows browning and caramelising to occur.

EGGS - Add no water. Two hours for hard yolks. If cooked longer the whites turn brownish, but the flavor is the same.

PASTA - Heat water in one pot and put dry pasta with a small amount of cooking oil in another pot, and heat until water is near boiling. Add hot pasta to hot water, stir, and cook about 10 minutes more.

BAKING - is best done in the middle of the day (10 am - 2 pm) Breads: Whole loaves - 3 hours; Cakes: 1 1/2 hours; Cookies: 1 - 1 1/2 hours and do not need to be covered. Avoid bottom crusts - they get soggy. Takes a while for the heat to work through, but with the sock to dull the foil it eventually will, and the sun makes wonderful fresh garlic bread.

SAUCES & GRAVIES MADE WITH FLOUR OR STARCH - Heat juices and flour separately, with or without a little cooking oil in the flour. Then combine and stir. It will be ready quickly.

SUGAR CARAMELIZATION - Sugar may be caramelized in a pot/pan, or in a box cooker. The usual temperatures in standard cookbooks can be a bit too high for solar cooking; the slow heating of solar cookers means more time is spent at a given temperature, so various stages of caramelization actually happen at lower temperatures than on a conventional stovetop. Roughly, browning (in a box cooker) begins at 140 °C (284 °F). Once the temperature starts to get above 149 °C (300 °F), the sugar will start to burn.

The temperature of boiling water is reduced as the altitude increases. For instance, the boiling temperature of water is only 95 °C (203 °F) at 2000 mt (6561.7 ft). and this slows the cooking. Dried beans may be difficult to cook at high altitudes because of this effect. You may try cooking your food in darkened canning jars with regular canning lids and rings tightened. The rubber seal allows excess pressure to be released but a low increase in pressure is retained and speeds cooking. We only recommend standard canning jars and lids as they are designed for pressure.