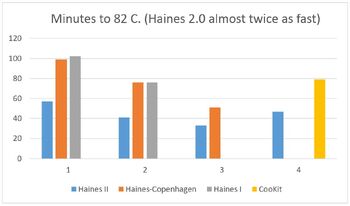 Separate from SCI's PEP testing, Haines Solar Cookers conducted their own non-ISO-based tests. According to Roger Haines, the new cooker heats water almost twice as fast as other panel or box cookers. In late January 2018, Roger Haines conducted side-by-side tests in Del Mar, California, comparing the new cooker with his original Haines Solar Cooker, a Haines-Copenhagen, and the popular CooKit.

Cloud and wind conditions varied over the four days of testing, but under all conditions, the new Haines 2.0 cooker consistently heated a liter of water almost twice as fast as the other solar cookers. The time it took for each cooker to reach 82 °C (180 °F). is shown in the table. 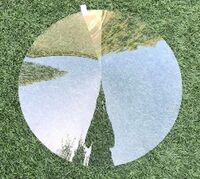 The new Haines 2.0 solar cooker has a transparent circular windscreen to retain more heat in cool or windy conditions.

The reflector is made from the same MPET (metalized polyester foam) material that we use for all of our solar cookers. This material has the right combination of flexibility, stiffness and durability to hold its shape, even in breezy conditions. 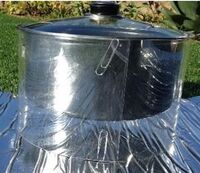 Panel solar cookers work best when the pot is enclosed in some kind of insulating “greenhouse.” For all of hiscookers, Haines makes use the Haines Cooking Sleeve—a rectangle of 0.5 mm transparent UV-resistant polycarbonate plastic rolled into a cylinder secured with large paper clips. The sleeve is adjustable to fit any pot that has a top rim or “flange” and no handles, such as our own 4-quart Haines dutch oven with silicone and glass lid. The cooking sleeve insulates and elevates the pot off the surface of the cooker so that sunlight can be reflected onto the bottom of the pot.