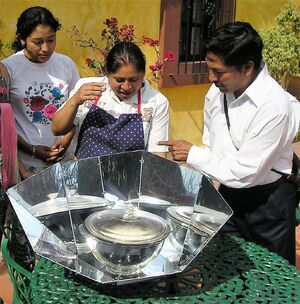 After years of research, the HotPot design was completed in 2004. It evolved from the CooKit solar cooker and was refined through the efforts of Solar Household Energy. The science and engineering were accomplished by the Florida Solar Energy Center. The reflector was designed by Glen Newman of Energy Laboratories, Inc. of Jacksonville, Florida. In 2006 tests to re-evaluate the capacity of the HotPot to effectively heat water and food were performed in Burkina Faso, The Gambia and Senegal and confirm again that the HotPot is an effective and efficient solar cooker.

The HotPot has been manufactured in Mexico by a private business, in cooperation with the Fondo Mexicano Para La Conservación de la Naturaleza, a non-profit. The manufacturer has sold the “fully loaded” HotPot package for standard commercial distribution in the U.S. and Mexico, and on a more economical basis for bulk developing world sales, via Solar Household Energy, Inc. 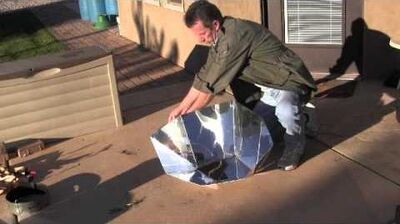 Cooks who love their slow cookers will love the HotPot. Slow cooker recipes for capacities up to three quarts can move right into the HotPot when the sun is shining, and the results will be even more flavorful and tender in the HotPot, without costing a cent for power or fuel. On a good day, foods can simmer gently for hours in the HotPot, with outstanding results, and the HotPot can also bake some kinds of simple breads and cakes. Its beauty, gentle efficiency, and convenience make it an excellent choice for anyone wishing to purchase a durable solar cooker. An inexpensive plant caddy with locking wheels can make it easier to turn the HotPot to keep ahead of the sun.

General Tips and tricks for solar cooking and solar panel cookers apply, especially getting food out early. To keep the Morning Glory reflector as shiny as possible, follow the directions for care that come with the cooker. The Morning Glory will also work with other dark pots in oven bags (or in the case of smaller pots, inside the glass enclosure that is part of the HotPot system), especially if you elevate them on a rack to let light get underneath. Since the reflector folds compactly and is light in weight, it travels well and can go along with a lighter-weight pot and oven bag if you are ever flying somewhere and would like to solar cook when you get there. To make a loaf-shaped loaf of bread in the HotPot, use matched dark bread pans that will fit in the

glass enclosure (loaf pans up to about 5"x9" should work) with one used upside down for a lid and secured with binder clips. Makes a lovely loaf, conveniently shaped for sandwiches. Matching brownie or cake pans can be used oven-bagged on a rack, to make traditionally shaped cakes or other treats. You can bake excellent brownies this way if you don't over-bake them. Check after no more than one hour, possibly less further south than 37-47N.

In full capacity, the HotPot is not a winter cooker for the north, but it did cook smaller amounts of simple-to-cook foods such as custard or vegetables in the dead of winter at 47 degrees north latitude, using a smaller dark, lidded pot inside the glass HotPot enclosure. It also helped to clip on a lightweight car windshield cover in a way that extended the height a few inches at the back. During the good part of the year, it works very well that far north and can handle full capacity loads as long as you get them out early.

Sling for the HotPot[]

Solar Household Energy's HotPot is an excellent greenhouse pot for solar panel cooking. The sling shown here makes it possible to carry a HotPot with one hand when it's both full and hot

Here's the sling on an upside down greenhouse: