Solar Cooking
Register
Don't have an account?
Sign In
in: Health and safety, Candidates for revision, Curated pages

Women and children the world over, are exposed daily to a quiet killer: household smoke. The World Health Organization (WHO) reports that in 23 countries, 10% of deaths are due to just two environmental risk factors: unsafe water, including poor sanitation and hygiene; and household air pollution due to solid fuel use for cooking.[1] A WHO report from June 2015 states that "seven million deaths every year are attributable to air pollution. This makes it one of the deadliest health risk factors globally, comparable to tobacco smoking, and the greatest cause of death in some countries.

Globally, 88% of the world’s population breathes air that does not meet WHO’s air quality guidelines".[2] While much of this pollution comes from transportation and power generation emissions, household sources are a significant contributor to global air pollution. For example, a December 2016 publication from the Global Alliance for Clean Cookstoves reports that researchers in India found that 30% of outdoor particulate matter pollution can be attributed to household emissions. A separate study, conducted in China, found "efforts to reduce household air pollution have been considerably more effective at reducing overall pollution than efforts to regulate emissions from the transportation and power sectors."[3] Although curbing emissions from these sources is a critical step in reducing global air pollution, expanding the use of clean cookstoves can often lead to the most rapid benefits for individuals and their families as clean cookstoves greatly reduce or eliminate the dangerous health impacts of household air pollution. The good news is that the adoption of tier 4 (non-biomass) stoves, which have lowest emissions of all available stoves and includes solar cookers, increased from ~30% in 2013 to almost 50% in 2015.[4]

The World Health Organization has reports "household air pollution from solid fuel use, is responsible for more than 1.6 million annual deaths and 2.7% of the global burden of disease... This makes this risk factor the second biggest environmental contributor to ill health, behind unsafe water and sanitation. Dependence on polluting solid fuels to meet basic energy needs represents one of the biggest threats to children’s health. Acute lower respiratory infections, in particular pneumonia, continue to be the biggest killer of young children and cause more than four million annual deaths. This toll almost exclusively falls on children in developing countries.” Scarce fuel also often means, unsafe drinking water is not heated to control water-borne diseases, and slow-cooking nutritious foods such as beans are dropped from family diets. In Kenya, water and smoke related diseases are among the top five major causes of mortality in children under age five years. According to PSI, current estimates show that the country has an annual incidence of between 3.5 and 4.6 severe diarrhea episodes per child. Poor nutrition, smoke and unsafe drinking water are also a health threat for people with AIDS.

Only recently has the magnitude of this issue come to the forefront of international concern. Two publications―a 2004 briefing by the Intermediate Technology Development Group (ITDG) titled "Smoke: the killer in the kitchen," and the Spring 2003 magazine Public Health from the School of Public Health at the University of California, Berkeley―attempt to quantify the negative health effects of exposure to indoor smoke on people in the developing world, especially women and children.

Approximately 2.4 billion people―over one-third of all humanity and two-thirds of the developing world―cook over biomass-fueled fires. Common biomass fuels include wood, charcoal, dung and crop residues. And though the percentage of the population that cooks with these fuels is expected to go down over time, the total numbers are expected to rise by as many as 200 million people over the next quarter century. Not only is this environmentally unsustainable at the global level, the health ramifications are devastating at the community and family levels. According to the Berkeley report, indoor smoke poses serious health threats. "In homes without ventilation, exposures to particulate matter, along with carbon monoxide, formaldehyde, benzene, nitrogen dioxide, and other gases, can reach 1000 µg/m3 over a 24-hour period―more than 20 times higher than standards set by the U.S. Environmental Protection Agency." Exposure to these pollutants can lead to a number of serious illnesses, including acute lower respiratory infection (ALRI), chronic obstructive pulmonary disease (COPD) and pulmonary tuberculosis. Evidence is mounting that other illnesses, such as lung cancer, asthma and cataracts, as well as low infant birth weight, may also be caused or exacerbated by indoor smoke. 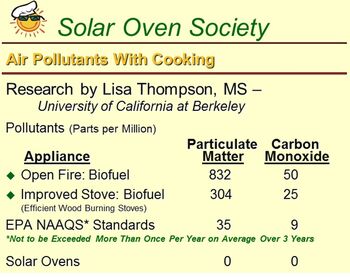 Household air pollution is the fourth-leading cause of premature death in the developing world. According to the ITDG briefing, women typically spend "three to seven hours per day by the fire, exposed to smoke, often with young children nearby." The briefing summarizes, as follows, the combined effect of these smoke-related illnesses on the population as a whole: "Indoor air pollution from the burning of solid fuels kills over 1.6 million people, predominately women and children, each year. This is more than three people per minute. It is a death toll almost as great a that caused by unsafe water and sanitation, and greater than that caused by malaria." [5] Women, as the briefing points out, are two to four times more likely to suffer COPD when exposed to indoor smoke pollution. Some studies suggest that women who cook over indoor wood fires are 2.5 times more likely to have active tuberculosis.

The ITDG briefing goes on to quantify the effect of indoor smoke on children. "Smoke in the home is one of the world's leading child killers, claiming nearly one million lives each year." In fact, according to the Berkeley report, ALRIs such as pneumonia and bronchitis are the leading cause of death among children in developing countries. Children exposed to indoor smoke are two to three times more likely to contract an ALRI. Children under the age of five, account for over 50% of all indoor-smoke related deaths. According to ITDG, the physiology of children makes them "absorb pollutants more readily than adults and also retain them in their system for longer." So, what can be done about this severe global health issue? People can't very well stop cooking, given that almost all staple foods need to be cooked before they can be eaten. As Dr. E. Bates put it, "If people do not have fuel for lighting, they must sit in the dark; if they do not have fuel for cooking, quite simply, they starve." Suggested solutions include better ventilation for existing cooking devices and the use of cleaner-burning fuels. High costs and limited access greatly reduce the chance that cleaner-burning fuels will be adopted by those most affected. Better ventilation will undoubtedly be incorporated when feasible, but the burning of biomass still negatively affects the environment in numerous ways. Solar cookers are the only competitively priced, smoke-free solution. Household smoke pollution disproportionately affects people living in regions that are conducive to solar cooking: India, China and sub-Saharan African, where the highest proportion of people cook with biomass fuels. The solar cooking community must take action to insure that public health officials are aware of the boon solar cookers are to the health of our women and children.

Kirk R. Smith is among the world’s leading authorities on the problem of household air pollution (HAP). A professor of global environmental health at the University of California, Berkeley, Smith has been researching the problem since 1981. In 2007, the World Health Organization found that HAP was killing about 400,000 people in India every year, most of them women and children. The agency found that pollution levels in some kitchens in rural India were some 20 times higher than recommended and that the pollution was several times as bad as that found in New Delhi. Globally, more than 1.6 million people per year die premature deaths due to HAP caused by burning biomass – wood, dung, roots, straw, and coal in households. HAP is receiving more attention than it used to. It’s being ranked up there with poor water and sanitation as an environmental risk factor… Since 2002, we’ve come to understand even more about how household combustion contributes to climate change. And one of the more interesting and important pollutants now is realized to be black carbon — small soot particles which are extremely warming in the atmosphere and also contribute to the melting of glaciers when deposited on them. About one-third of human-caused black carbon emissions in the world are from poor household combustion. So you can’t have a black carbon program without considering combustion in households. [Source: Worldpress.com 7/23/09]

The team of Rob Balis, Majid Ezzati, and Daniel Kammen have done extensive research into the pollution generated from wood-burning cookstoves in Africa. Daniel Kammen, a professor of public policy at the University of California at Berkeley, reports that their findings show the levels of greenhouse gas emissions (GHG) from charcoal burning and production, are significantly higher than previously believed. He estimates that 250 million people use charcoal for their domestic energy at least once a week, mainly in Africa, parts of Asia, and Brazil. Their findings were first published in the March 2003 issue of Environmental Science and Technology. Read their report at Greenhouse Gas Implications of Household Energy Technology in Kenya The charcoal-fueled stoves do however, produce 75−95% less carbon particulate compared to wood-fueled alternatives. This fact immediately points to a benefit of burning charcoal to reduce the incidence of particulate related respiratory disease. If large scale charcoal production is able to be done in a sustainable fashion, charcoal can be promoted to significantly help reduce respiratory disease. However, often charcoal production is done illegally, using very inefficient techniques, creating additional environmental problems. The use of an efficient, well-maintained wood stove, like the improved combustion stoves variety, will reduce carbon emissions by approximately 50% over open fires. Limiting the air flow, or damping down the air intake of these stoves, will lower the stove temperature and extend cooking times, but will release more carbon particulate. Conversely, the use of charcoal increases the amount of other greenhouse gas emissions released into the atmosphere when compared to using wood or biomass fuels. Possibly 6-13 times as much GHG is released using charcoal fuel compared with bio-mass fuels. According to Kammen, this negative aspect is not significant compared to the respiratory health benefit of cooking with charcoal. The amount of GHG emissions generated by cooking activities is still a very small contributor to the total coming from all other emission sources. Improved combustion wood stoves will continue to be an important component of integrated cooking. Their use will be encouraged, when solar cooking is not possible. With either approach, heat-retention cooking can save time and fuel.