Most solar cookers work on the basic principle: Sunlight is converted to heat energy, that is used for cooking.

Below is the basic science for solar panel cookers and solar box cookers. Another style of solar cooker is a parabolic solar cooker. They typically require more frequent reorientation to the sun, but will cook more quickly at higher temperatures, and can fry foods. Evacuated tube solar cookers use a highly insulated double-wall glass tube for the cooking chamber, and do not require large reflectors. 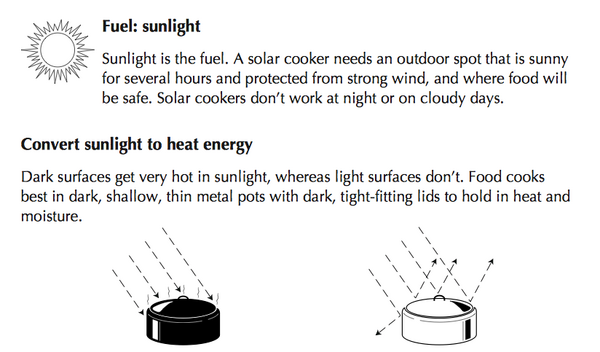 A solar cooker needs an outdoor location that is sunny for several hours and protected from strong wind, and where food will be safe. Solar cookers don't work at night or on cloudy days, though during the best months for cooking, many foods can be cooked under intermittent clouds or a light haze, as long as food is put out early and there is definitely more sun than not overall. 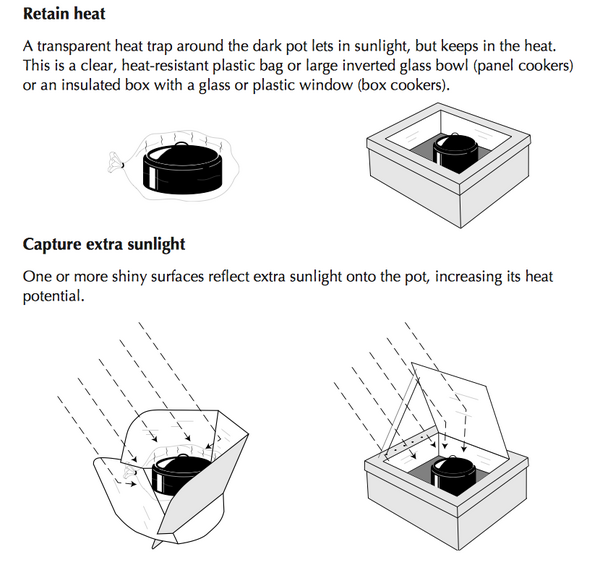 At its simplest, the sunlight-to-heat conversion occurs when photons (particles of light) moving around within light waves interact with molecules moving around in a substance. The rays emitted by the sun have a lot of energy in them. When they strike matter, whether solid or liquid, all of this energy causes the molecules in that matter to vibrate. This activity generates heat.

One or more shiny surfaces reflect extra sunlight onto the pot, increasing its heat potential. Mirrors, aluminum foil, Mylar, mirror-finish metals, chrome sign vinyl, and other shiny materials have all been used successfully for solar cooking, depending on the type of cooker and the environment in which it will be used.

Parabolic solar cookers use a bowl shaped reflector to focus the light more directly onto the cook pot, usually from below, and typically do not require a greenhouse enclosure to retain the heat. The parabolic name refers to the shape of the curve of the reflector cross-section.

They will require more frequent reorientation to the sun, possibly every 10 minutes, but they cook food more quickly at higher temperatures compared to other solar cookers, often reaching over 200°C (400°F). They also have the ability to fry foods. Generally parabolic solar cookers will need to be attended to more than box or panel cookers to avoid possibly burning the food at the bottom of the cook pot. They are especially useful for large-scale institutional cooking.

Evacuated tube solar cookers use a double-wall glass tube for the cooking chamber. The space between the glass is created as a vacuum, providing excellent heat retention. While efficient, glass technology somewhat limits the size of opening of the glass tube, requiring smaller cooking pots.

Retrieved from "https://solarcooking.fandom.com/wiki/How_solar_cookers_work?oldid=115842"
Community content is available under CC-BY-SA unless otherwise noted.