Director, William Burninabe, founded ISOMET in Burkina Faso in the late nineties. He had previously studied in Germany, where he became acquainted with solar cooking technology. When he returned to his country, he started a small business, basically in his own backyard and with the assistance of family members, making and selling wooden box cookers.

Because of the cost of the boxes, the audience was primarily a middle class one, at least initially. Even then, the ovens were usually sold on a pay-over-time business, and collecting the money proved problematic. Efforts to assist in the development of a micro-credit scheme, to be managed by a banking firm, were not successful.

In 2000, William, who is loosely allied with Solar Household Energy, Inc. as one of that organization's roster of solar entrepreneurs, returned to Germany for another course of study. On his return, a larger scale business plan was developed - one that would create a proper workshop and permit a number of employees to be used in expanding cooker production.

It was the beginning of ISOMET. Mr. Ilboudo and his workers have installed a solar bakery capable of producing 1500 loaves of bread a day. The bakery is equipped with a 16 sq. meter. Scheffler reflector, and has a heat retention system using a container filled with stones.

The franchise network creates jobs and generates income for women in rural areas. These women also benefit from technical and management training. One oven provides income for at least three people in one village. Furthermore, households enjoy greater purchasing power thanks to the reduction in the price of bread, and improved living conditions due to the more hygienic method of food processing. 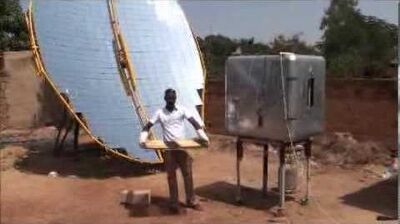