Instituto Ecuatoriano de Investigaciones y Capacitación de la Mujer is a national focal point of INSTRAW (the United Nation’s International Institute of Research and Training for the Advance of Women). It is an autonomous national organization, which was founded in 1986. In August 1989, IECAIM initiated a training program for rural women designed to provide a practical solution to the problem of deforestation in Ecuador’s countryside. In collaboration with INSTRAW and Solar Cookers International, IECAIM conducts training courses for rural women that enable them to utilize new sources of energy in their agricultural and household tasks. 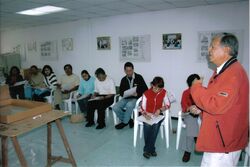 The participants, rural women belonging to the “comunas campesinas” are instructed in the use of alternative energy sources, such as solar, biomass, geothermal, etc. Participants also learn how to construct simple devices that save energy and/or utilize alternative energy sources. These include: solar cookers, a grain dryer based on solar and wind energy and solar devices for the heating of water and the dwelling. IECAIM organizes and teaches the courses. 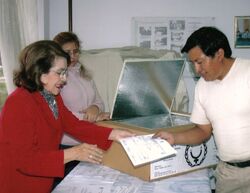 To date (September 2008) 500 people have participated in the training program. As a result, they have access to improved solar cooker stoves and grain solar dryers. The stoves save fuel and decrease women’s exposure to the noxious effects of smoke. The improved grain dryers based on solar and wind energy protect the grains from animals, rain, etc. The use of these devices that conserve fuel or utilize alternative sources of energy, decreases the necessity for travelling long distances in search of fuel wood. It also prevents deforestation, which causes so much of income-generating opportunities for participants, who may eventually earn income by constructing and selling these new devices to other women.

In addition in Quito, Ecuador, at the equator, the centre of the world, in South America, IECAIM initiated the project on technology, construction and commercialization of solar cookers that is benefiting 400 women and their families. They construct and sell the solar cookers.