Solar Cooking
Register
Don't have an account?
Sign In
in: NGOs, Manufacturers and vendors, France,
and 14 more

The French organization Inti credits three “Ps” for their successes in spreading solar cookers: Passion, Perseverance, and Positive attitude. As of 2018, Inti had distributed more than 19,000 solar cookers in the Andean countries of Bolivia, Chile, Peru and Argentina, benefiting 120,000 people in communities there. Thirty of their solar cooking trainers are present in these Andean countries. Inti also distributes Rocket Stoves in Chile and Argentina. In addition, it has several initiatives in the African countries of Benin, Guinea, Senegal, and Morocco where an emphasis is placed on the wood saving aspect of solar cookers and Rocket Stoves. Over 16,000 Rocket Stoves have been distributed in these countries.

In their home country of France, Inti has programs for school age children centered around solar cooking. 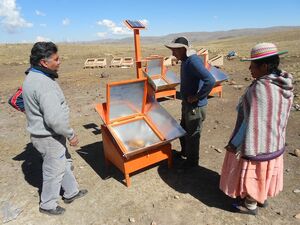