Cooking with a solar box cooker or solar panel cooker is similar to using a slow cooker (crock-pot). Typically, cooking times for these types of cookers are twice that of conventional cooking methods, however, slower cooking also has its advantages. Since these cookers provide a moderate, even heat, they usually don't have to be turned to follow the sun and the food does not have to be stirred during cooking. This frees the cook up to do other useful tasks while the food cooks independently.

Parabolic solar cookers offer another approach to solar cooking by being able to reach higher temperatures and perform more like a traditional stovetop. As such, they require more attention while cooking to avoid burning the food and they need to be turned periodically to follow the sun, depending on cooking time. 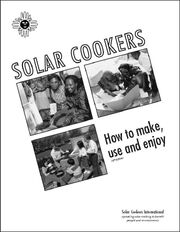