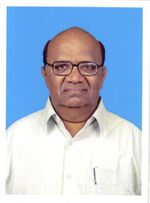 Dr. Jagadeesh Anumakonda, with the Nayudamma Centre for Development Alternatives, has been involved in solar energy for over three decades and has designed a simple solar drier, vertical and cylindrical solar water heaters, and a solar disinfection unit for safe drinking water.

Retrieved from "https://solarcooking.fandom.com/wiki/Jagadeesh_Anumakonda?oldid=119161"
Community content is available under CC-BY-SA unless otherwise noted.