See also: Global Calendar of Events and past events in Japan 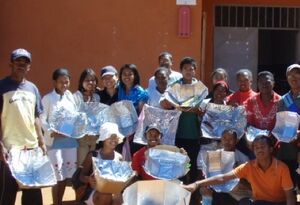 The Clean Energy Utilization Research Study Group was established in Japan in 1994 to organize activities for a range of environmental initiatives within the country. A Solar Energy Festival has been held annually in the north of Japan; the Solar Energy Society's International Symposium was first held in the country in 1992. Most Japanese people have not been interested in solar cooking for themselves, as they use gas or electricity for cooking, which they find satisfactory. But many view solar cooking as an opportunity to teach people about larger energy issues. A book on solar cooking, "Cooking by the Sun" was published in Japanese in 1995, edited by members of the group. It includes and several types of cookers manufactured in Japan, which are largely for learning more about the technology and used in research.

Japan has had one particularly faithful solar cook, however. Her name is Yasuko Torii, and she has invented a number of cookers that she displayed at several world conferences. One was a very small box cooker, the other a larger version made of an aluminum product used in Japan as a drip pan for ovens. She has been an active promoter of solar cooking for many years. She created a solar cooking mailing list for the country, with most of the individuals living in Tokyo.

Recently, an announcement was made about the manufacture in Japan of a household size parabolic for sale in the Japanese market. The device is a dish reflector, mounted on a tripod. One other related commercial product manufactured is a stainless steel well-insulated hay box made by Toyota, and has been sold in various countries. Both devices are expensive and not well suited for poor countries, but they could be marketed to middle class audiences in Asia, Europe, and North America.

The entities listed below are either based in Japan, or have established solar cooking projects there: