The vision of the Jordanian Renewable Energy Society (JRES) is to stimulate the use of renewable energy resources in Jordan and worldwide - to use that energy efficiently for the benefit of Jordan and for all Arabic countries - to invest in the now practical renewable energy technologies for the benefit of the Arabic world and - to focus on how to obtain more of our future energy resources renewably from the sun. 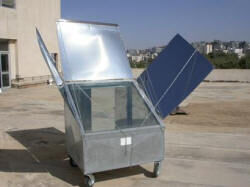 Retrieved from "https://solarcooking.fandom.com/wiki/Jordanian_Renewable_Energy_Society?oldid=125449"
Community content is available under CC-BY-SA unless otherwise noted.