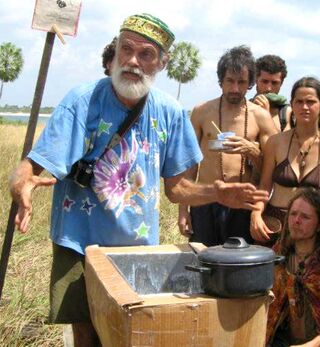 Jose Albano, of Pleno Sol made his first solar box cooker in 2005. He has translated solar cooker material from English to Portuguese. In 2006, Jose helped lead a workshop for trash collectors in making solar cookers from recycled materials.

"I discovered, through a link, the Solar Cookers International Network and the amazing amount of information on solar cooking available through its many links. I had been interested in solar cooking because I live in Fortaleza, on the northeastern coast of Brazil — the ‘hot’ area for the use of solar energy. But, I had always thought one needed a high-tech polished metal parabolic device to solar cook, much above my economic means and not available for sale here.

So, I was greatly surprised to know of solar box cookers and specially the cardboard solar box cookers you have introduced and spread to the world. Skeptical, I decided to build one, following the instructions on the Archive. In utter disbelief I took out of it my first pots of brown rice and lentils, perfectly cooked and delicious! The experience has changed my life!

Just one year later, I have cooked hundreds of meals, have built some 20 solar cookers (mostly the box type, but also some panel type), have researched and designed modifications, … have shown one of my solar cookers on television, and have conducted a number of workshops to teach interested folks. I also come back to the ever expanding Archive … and I have been trying out and adapting or developing new recipes almost on a daily basis. Like yourself, I feel the urge to spread the good news. At 61 years old, and going strong, I am convinced that if there is such a beast as a solar cooking virus, then I have certainly been seriously infected!”