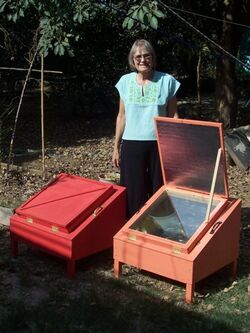 Kathy Dahl-Bredine and her husband, Phil Dahl-Bredine continue to live and work in the indigenous mountain area north of Oaxaca City, Mexico with Mixtec indigenous communities. Formerly with Maryknoll Lay Missioners, they are a part of a small non-profit organization, Instituto Paz en las Americas. For the past 15 years they have collaborated with CEDICAM, a local organization of small farm families, as well as other local groups. Ms. Dahl-Bredine works mostly to empower families in techniques of sustainable, organic farming practices, agro-ecology, and reforestation. She focuses on working with children, youth, and families on appropriate technologies, including solar cooking.

Kathy Dahl-Bredine is also the inventor of the Windshield Shade Solar Cooker, which is probably the simplest solar cooker yet devised.

She reports being a user and teacher of solar cookers since 2001 - teaching more than 150 people and distributing over 100 cookers, empowering at least 500 people in Mexico.