Khan's Backpack Solar Cooker was designed by Muhammad Yasin Khan, living in Chichawatni, Pakistan. His intent with this solar cooker was to make a portable and lightweight cooker that could be carried over the shoulder by hikers, tourists, and picnic lovers. It is also well-suited for use in arid locations.

The cooker is comprised of a pair of conical roll-up reflectors enclosed within a PCV cylinder 67.0 cm long by 11.5 cm in diameter. According tot the designer, the cooker is capable of making tea, to cooking eggs, rice, and meat for three people. The cooker's innovation lies in its ability to be folded down to a compact package for easy carrying. It weighs 2 kg. without pots.

It uses a funnel type concentrator to focus incoming light onto a vertical column (Fig.1). Multiple pots can be stacked vertically. To stabilize the cooker, four extendable metal rods are attached at the base. Instead of covering the cook pots with a cooking bag, a dish made of transparent plastic is slipped down into the tunnel above the pots. 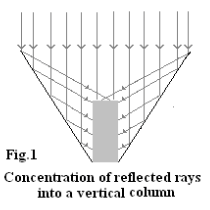 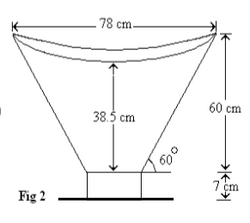 Retrieved from "https://solarcooking.fandom.com/wiki/Khan%27s_Backpack_Solar_Cooker?oldid=86980"
Community content is available under CC-BY-SA unless otherwise noted.